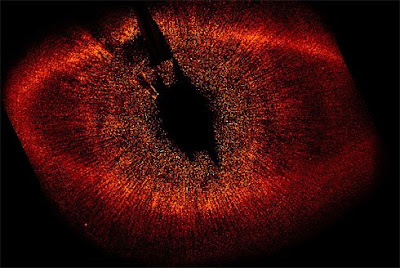 Astronomers reported Thursday that they have the first snapshot of another solar system — one with three planets larger than Jupiter — orbiting a nearby star.

Circling the star HR 8799, the three planets "are a scaled-up version of our own solar system," says study leader Christian Marois of the National Research Council Canada. A large star about 128 light years away (a light year is about 6 trillion miles), HR 8799 resides in the constellation Pegasus, according to the online report released Thursday by the journal, Science.

"This is the first image of a multi-planet solar system," says Marois, who headed a U.S.-Canadian team that sifted light measurements from the star in 2004 and 2006 to photograph the planets in infrared light. "Here we are actually seeing the light, temperature and size of these planets."

Astronomers are also releasing images of single giant planets orbiting nearby stars, including one in Science from a Hubble space telescope team led by Paul Kalas of University of California, Berkeley, which released an image of a giant planet orbiting the star Fomalhaut.

Direct observations of planets come after more than a decade in which astronomers have detected planets, about 300, orbiting nearby stars through indirect means, such as gravitational wobbles in stars induced by planets and dips in light as planets transit across the face of their star.

Marois and colleagues essentially collected infrared light from the star over time, and then subtracted light emanating directly from the star, to leave behind an image of the three orbiting planets. They also looked at 19 other "A"-type stars, similar to HR 8799 in weighing about twice as much as our sun.

Previously, astronomers have only been able to directly image larger "brown dwarfs," failed stars about 40 heavier than Jupiter, says astronomer Sean Moran of the California Institute of Technology in Pasadena, Calif. "So a direct image of a real planet would be quite exciting," says Moran, who was not part of the studies.

"The fact that (Marois and colleagues) found their triple planet system after looking at just a few stars would seem to imply that either they are incredibly lucky or that these systems are relatively commonplace," says planetary theorist Alan Boss, author of The Crowded Universe: The Search for Living Planets. "Further observations will decide which is the case," he says, by email.

All of HR 8799's planets are cloud-topped giants, says Marois. They resemble Jupiter and Saturn but are much heavier at 7 to 10 times the mass of Jupiter. They respectively circle the star at 24, 38 and 68 times the distance that Earth circles the sun, which is about 93 million miles.

Both Boss and Moran caution that more observations by independent groups will be required to confirm that the images are true snapshots of nearby planets.