The Haunted Home of Joan Crawford 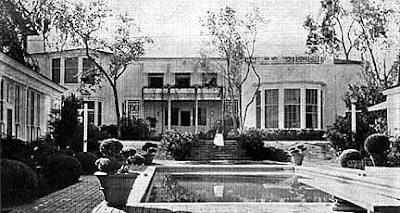 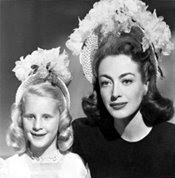 Few actresses have rivaled Joan Crawford for star glamour and staying power as one of Hollywood's top movie queens. Her stardom spanned an amazing five decades and included such films as Our Dancing Daughters (1928), Rain (1932), Johnny Guitar (1954), and her Academy Award-winning performance in Mildred Pierce (1945).

Joan Crawford epitomized the essence of the Hollywood rags-to-riches story-a poor shopgirl who, in the 1920s, becomes the very embodiment of America's "flaming youth" and then transcends the role of "dancing daughter" to emerge the heroine of America's favorite melodramas.

In 1978, Christina Crawford, Joan's adopted daughter, wrote Mommie Dearest and shocked the United States with her heart-wrenching story of what it was really like growing up with one of Hollywood's most famous leading ladies. Mommie Dearest was on the New York Times best-seller list for forty-two weeks and was made into a 1981 film starring Faye Dunaway.

In 1989, we heard rumors of haunting manifestations in Joan Crawford's former home, and Christina seemed genuinely surprised that we knew about the stories.
"Not many people know that the house I grew up in may be haunted. It is not in print anywhere," she said.
When asked if there were manifestations or hauntings that she could remember as a child living there, Christina recounted the following:

I have vivid memories of some things, but when you are severely abused, you tend to block out other things. I'm positive that there were manifestations occurring when I was little. I saw them! There were places in the house that were always so cold that nobody ever wanted to go in them.

But as a child, I saw things in the house! There was, of course, no context or framework in which to put what I saw and felt. I had nobody to speak to about the occurrences.

Any time I would become extremely frightened and would get out of my bed to try and find somebody, I was always treated as though I were just being a "bad child" that didn't want to go to sleep. I always expressed my fear to my mother because it was she that I went to find to help me ... because I would be very upset and I'd be crying.

I used to have terrible nightmares and that kind of thing, but a lot of it had to do with the fact that I saw things in the night; so the solution to that finally was just to leave the lights on everywhere. One of the things I saw seemed like an apparition of a child ... or children, but as I said, I may have blotted out a lot.

Christina told us that she had not been back to the house since she was seventeen. "That was when I went to college [in 1956], at which point, Crawford still owned the house."

Christina recalled her last day there:

I remember the woman who had taken care of me and my two younger sisters since I was four years old just watching me, without saying a word. I was going from room to room in the house, without saying anything, just standing in the middle of each room, then going on to the next one. She finally asked me what I was doing. I told her that I would never see this house again, therefore, I was saying goodbye to it.
Many years after I had left, we met again. She was now an elderly woman and had retired. We always had been quite close. She told me she had always remembered the look on my face when I said my goodbyes to the house. It seemed a strange thing to do, to say, 'I'll never see this house again,' when at that time there was absolutely no inkling of the house being sold. In fact, it was not sold for another two and a half to three years, and, indeed, I never have been back.

Christina had learned recently that the current owners of the house had called in the Reverend Rosalyn Bruyere of the Healing Light Center to work with the house:

Rosalyn described what she had seen in the house when she went there. She picked up on some things that astounded me because they seemed to validate what I may have seen and experienced when I was little. It gave me goose bumps when Rosalyn told me that she discovered so many spirits in the house and there had been signs of ritual abuse in one of the rooms. Many of the spirits had "underworld" connections.
I was sent to boarding school when I was ten years old. I came home infrequently after that. I always believed that I was sent away partly because I was too much the eyes and ears to the world--a witness. I saw too much, I guess.

Some of the things that I saw that were going on were very violent. Her [Joan Crawford's] relationship with men, a number of men, was extremely violent. I was getting too old, and I was beginning to understand what was going on.

That house is so weird! Now, evidently, the walls are starting to catch fire! Other people have heard children's cries in the walls! Every single owner has had trouble.

The first one was Crawford. She built the majority of the house. It was a small cottage when she bought it, but most of the house, she built. She sold it to Donald O'Connor, who sold it to the Anthony Newleys. They sold it, I think, to the current owner, who is a friend of the Reverend Rosalyn Bruyere, and they asked her to "work" on the house.

Every single family that has lived in that house has had horrible things happen . . . illnesses, alcoholism, addictions, relationship problems, and now, evidently with the current owner, the walls are breaking out in flames! I've heard that in particular it's the wall that was behind Crawford's bed.

Although the scene is in her book, Mommie Dearest, Christina re-minded us that the last words that Joan Crawford uttered were to a woman who was kneeling at the foot of her bed, praying for her.

"As she was dying," Christina said, "Crawford opened her eyes and said directly to the woman, 'Don't you dare ask God to help me!' ... and then she died." It was such arrogance, Christina said, that she believes is a major part of the difficulty with the seemingly accursed house.

And that has nothing to do with me! So it would not surprise me in the least if the "haunting" spirit that is in the house is Crawford! She was capable of real evil. If you have never experienced that "look" from another human being, it is almost impossible to believe that such an experience could even exist! I think perhaps that's why so many people are unwilling to deal with the shadow side because they can't really get themselves to believe that such a dimension exists.

My brother and I were absolutely terrified of her. In fact, there is a passage in Mommie Dearest that describes ('the look" on her face) when she tried to kill me when I was thirteen. We all saw "that look." My brother and I talked about it extensively ... it was not of an ordinary human being!

Later, we were able to contact the Reverend Rosalyn Bruyere of the Healing Light Center, who kindly agreed to share her thoughts on the manifestations in Joan Crawford's former home.

"It is true that the house was afflicted with spontaneous fires, primarily in the wall behind where Joan Crawford's bed used to be. However, I did not pick up that Joan Crawford's ghost was there."
The Reverend Bruyere expressed her opinion that the house had been poisoned in some way before Crawford had moved into the place but that the evil in the house had added to Joan's neuroses. The actress had apparently built onto a pre-existing cottage in a very chaotic man-ner.

"Nothing is where it should be," Rosalyn commented. "She added dining rooms and hallways that led to other dining rooms. It all combines to form an H-shaped house. Turn a corner and you're lost."
The noted healer, who in this case served as an exorcist to clear the home, said that she found the haunting existing in levels.

"It was a place of conspicuous negativity. I called it an 'Astral Central,' a gathering of spirits that were attracted to the negative vibrations. People had been tied up and tortured in that house. I picked up on gangland figures, corrupt politicians. There is an area in the house where a child [not Christina] had been tortured and molested. Terrible things went on in that house."
The Reverend felt that ghosts themselves were trying to burn the house down.

"Once the Beverly Hills Fire Department spent four days there attempting to solve the mystery of the spontaneous fires that would break out on the walls," she said. "I feel the spirits were trying to burn the house down to protect some horrible secret. There is something hidden there. I am certain that there are bodies buried in that basement."
She said that there had only been one recurrence in the house after she had exorcised and cleared it. "The house had become an astral dumping ground, but it seems clean now."

When we [Brad and Sherry] visited the former Crawford home in the early 1990s, the current owners graciously allowed us to enter to film a segment for an HBO special on haunted Hollywood. The couple told us that they had experienced some mysterious pyrotechnic phenomena and had witnessed quite a number of apparitions of quite a wide variety of entities in various parts of the home. The couple said that the small cottage next to the swimming pool very often seemed to be center of haunting phenomena.

We kept in touch with the couple for quite some time. It was not long after we had filmed in the Crawford home that they decided to move. We have no comment from them whether or not it was because of any haunting phenomena.

It would seem over the past decade that the once haunted mansion of Joan Crawford has found peace, for we have heard of no further ghostly activity occurring in the home. 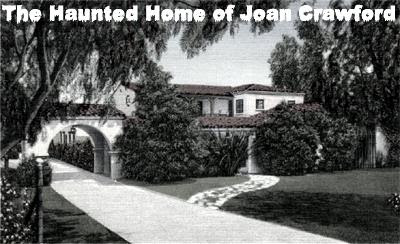 Hey ! Genuinely it’s really possible to earn money online; I really felt that this website is quite impressive and a great idea to earn hundred’s of Dollars daily.

Hi! I know this is kinda off topic however , I'd figured I'd ask.
Would you be interested in exchanging links or maybe guest writing a blog post or vice-versa?
My blog goes over a lot of the same subjects as yours
and I feel we could greatly benefit from each other.
If you're interested feel free to send me an e-mail. I look forward to hearing from you! Excellent blog by the way!