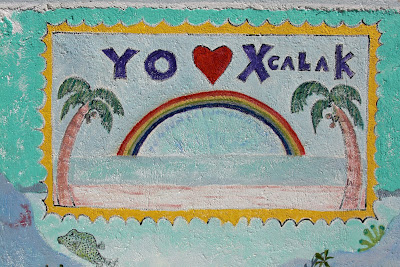 Wanting to jettison myself from the frozen wastelands of Minnesota where the coldest winter in one hundred years has been persisting, I recently chose an appropriate place for some much needed climactic counterpoint: Xcalak, Mexico-an old fishing village terminus of sorts where the highway ends and approx. seven miles to the south, Belize begins. A bit freaked by the Mexican government issued ‘travel advisories’ forwarded to me by a concerned relative and which morbidly tallied the number of gringos who have disappeared recently, either the victims of drug war cross fire, riots or fair game targets of the numerous Banditos marauding the country’s roads, I had hesitations about traveling alone. However, in light of this info., I made sure to call on angelic forces for protection during my five plus hour drive from Cancun where I landed -particularly the archangel Michael and this most certainly helped ease my nerves a bit.

Such trips south of the border are not without the requisite rite of passage as it took me nearly two hours to get out of Cancun, thanks to a military check point set up to ‘catch’ drug smugglers and which blocked one lane just north of Highway 307 ,causing mucho aggravation indeed. I later learned that it was put on for a new general of the Mexican army ‘concerned’ about corruption amongst enforcement agents hired to keep the drug lords in check. Once freeing myself of the L.A. like traffic jam and accelerating to 120 Km so as to breathe a bit easier, it wasn’t too long before I was in Mayan territory, passing by busload after busload of turistas destined for the pyramids of Chitzen Itza, et. Al. Based on the garish descriptions offered by a friend of mine who’d been to these sites-of Knights of Columbus geriatrics trying to climb the ruins using walkers and ‘Solar Initiate’ New Agers wearing white gowns and ‘shift facilitating’ at the base of the ruins around the solstices and equinoxes, I chose not to investigate these traps and worked my way further south to Tulum where the energy was exuberant and served to relax me further and caused me to forget about potential hijackings of the economy sized Matiz I was driving and my physical body as well. It really felt like a positive vortex opened above me as a welcome, a nice prelude to birth me into what lay ahead at the literal end of the road.

According to the directions I downloaded off the internet-I was advised to fill my tank well before arriving, which I did as there are no gas stations whatsoever in Xcalak. There are no banks either. So with a money belt brimming with pesos, I traveled on with a bit of lingering trepidation which seemed to wane the closer I got to my destination. If you choose to go to Xcalak, it is advised to bring a laptop with you to make payments for such things as fishing outings, dive instruction and the like. I was able to use my I-Phone to make such purchases, but keying in information with one finger on the Pay Pal page can be a bit tedious, esp. with an unreliable third world internet connection that cut out from time to time.

Xcalak is certainly the proverbial sleepy village miraculously escaping the intensive development found further north. My immediate impression after arriving and riding a sea rusted bicycle aptly named ‘The Hurricane’ was the absence of beggars and obnoxious vendors forcing one to buy handicrafts, dope and by-the-hour putas as they do in Cancun with a relentlessness that is unmatched in any country I’ve been to (other than Kashmir in Northern India). This allowed me to relax even further and take in the delightful profusion of flora and fauna which grace the community such as Tropical Mockingbirds, Yucatan Jays, Magnificent Frigate birds and Brown Pelicans which command the shores from morning to night. Exploring the jungles which buttressed the wash-boarded ‘roads’ was out of the question. According to the owners of the Tierra Maya hotel where I resided, there’s a Mayan pyramid about three hundred yards across the road from them, completely hidden by the jungle and which would take an entire day to get to. There are laws, thankfully, prohibiting the use of machetes to hack through the thickets of Mangrove that make foot travel nearly impossible. The surrounding jungle is home to Panthers and a colorful variety of poisonous snakes and other scaled vermin-so it would be wise before setting out without the necessary precautions and to find a local guide you can trust to take you into truly untrampled territory. 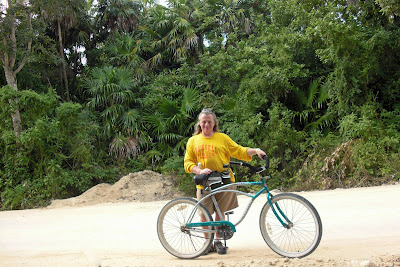 The primary reason for my escape to Xcalak, besides soaking up sun and surf, was to get PADI certified as a scuba diver-something I’ve always wanted to do. Booking the course at one of the local dive centers, I then met my instructor Benito-who in the course of a week managed to get me over every single one of my fears of going under water, making emergency ascents, equalizing and breathing. With treacherous conditions often prevailing in the mornings, I would return in a few hours and the wind would calm down enough for us to go out and do the required exercises needed for certification such as taking ones mask off underwater, putting it back on and evacuating all water by exhaling forcefully through the nose. No need for a Neti pot when you do this and the sensation of having your sinuses reamed with salt water is unlike any other. However, it was actually enjoyable to surmount the mostly mind generated obstacles and actually scuba dive, which overall is a very relaxing venture. 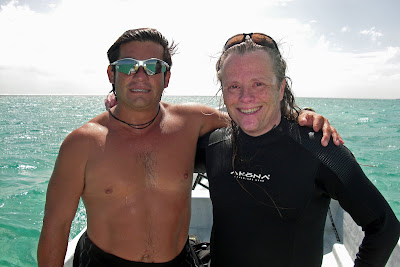 We did four open water dives to approx. 60 ft. and it was a letdown every time to see Benito give me the thumbs up sign, meaning we had to start to surface as our tanks were running low. In the half hour that our air tanks afforded us underwater time, we took in as much of the bewildering and resplendent marine life as we could. Mi compadre showed me such wonders as upside down Freshwater Jelly fish, sea turtles and Barracudas along with brilliantly colored sponges, elliptical star coral, venus sea fans and four eye butterfly fish. I felt such a sense of peace beneath the turmoiled waves and skies above. As I swam along the edge of one of the reefs, I envisioned a summit meeting being held there by world leaders and thought that a viable, life sustaining consensus would be reached, well before the tanks ran out of oxygen, in regards to our emperiled planet and how to go about healing it. “The ocean is the ultimate solution.” as Frank Zappa aptly titled one of his instrumental compositions. I certainly appreciated his observation even more after exploring it as extensively as possible off the shores of beautiful Xcalak. Perhaps those in power will finally listen to it and get the answers they need.

Sadly, the certification week went by too quickly, but I passed all the tests even as exhausted as I was. Benito was kind enough to come into the dive center on his day off to check my test scores and I found this otherwise rare hospitality to be the norm throughout Mexico. Scuba diving is the most physically and mentally demanding of sports-even more so than climbing, cross country skiing and snowshoeing, IMO. It felt like I had been steamrollered several times and I could barely move around in the evenings after a dive. Extensive yoga and a supplement called Cell Food saved me from total exhaustion and muscle soreness along with periodic doses of the homeopathic Arnica. I also found my psychic abilities greatly amplified underwater. More on this in Part II.

The one experience during my Xcalak stay that did totally wipe me out however, was an encounter with a glittered klatsch of beautiful people pawing each others jewelry and clothing, hypnotized by the Margarita glasses they toasted each other with. The scenario served as a stark contrast to the genuinely kind souls of the indigenous locals I encountered in such a heart warming and endearing way. The dreaded encounter took place at the Leaky Palapa restaurant where the food was fabulous but the vampiric clientle I had no choice but to observe in a captive audience kind of way, knocked the spiritual stuffing out of me and I had bad dreams all night of these vampires which fortunately stay together north of the bridge in Xcalak (where the photo below was taken), hidden in their well manicured enclaves. 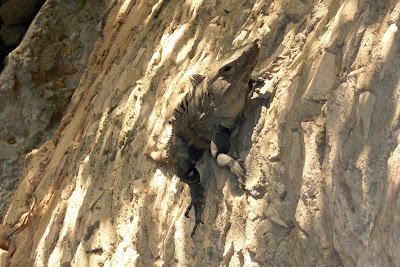 Xcalak is a place I will most certainly return to as I truly felt at home there-something very rare in my world travels indeed. Tune in for Part II soon.

AS ONE OF THE POSSIBLE "VAMPIRES" YOU APPEAR TO HAVE MADE A MASS GENERALIZATION OF THOSE OF US WHO LIVE NORTH OF THE BRIDGE IN XCALAK. DON'T BOTHER WITH PART II UNLESS YOUR INFORMATION IS ACCURATE.