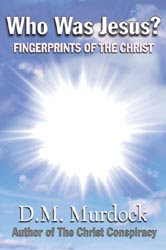 Who Was Jesus?
Fingerprints of The Christ
A Review by
David Mills
Author of Atheist Universe

Anyone who knows me personally already appreciates what a huge fan I am of D.M. Murdock (aka "Acharya S"). After reading-and thoroughly enjoying-her book Who Was Jesus? Fingerprints of The Christ, my admiration of Ms. Murdock has climbed to an even loftier elevation. Murdock is one of only a tiny number of scholars with the richly diverse academic background (and the necessary courage) to adequately address the question of whether Jesus Christ truly existed as a walking-talking figure in first-century Palestine. This question, and many others related to New Testament reliability, are directly confronted and satisfyingly answered in Who Was Jesus? I loved this book. It is absolutely superb in every way, from the eloquence of the writing to the integrity of the scholarship. This book should be required reading in every American classroom.

My personal recommendation is that Who Was Jesus? should be the first book purchased and studied by anyone, atheist or true believer, who wants to debate Jesus' existence and the Bible's veracity. Why the first book? Because Who Was Jesus? presents all the background knowledge from which any informed discussion of Christianity must proceed. In doing so, Murdock quotes the very voices of Christian and New Testament scholars, evangelists and apologists themselves, hoisting them on their own petards! Just as a diplomat could not make meaningful proposals for Middle East Peace without an intimate knowledge of the region’s history, neither can any individual engage in intelligent discussion of Christianity without a working familiarity with the information in this brilliant volume. You should therefore make this book priority reading even over The God Delusion, God is Not Great and other excellent but, in my opinion, less important books than Murdock's.

Amply citing Old Testament text to document how the New Testament was adaptively contrived from the Old by using it as a blueprint, Murdock's book focuses primarily on how the New Testament was put together, or should I say "thrown together." I have read many books, both by Christian apologists and resolute atheists, in which the authors displayed very poor understanding of what's actually found in the New Testament. Most people, including some New York Times best-selling authors, seem to derive their "knowledge" of the Bible from hearing their own pastors' sermons on Sunday mornings or, if they’re atheists, from their distant childhood memories of their pastors' sermons on Sunday mornings. In either case, as Murdock points out so adroitly and entertainingly, our popular conception of what Scripture says is often completely at-odds with the text itself. Yes, most people remember that the first four New Testament Books are Matthew, Mark, Luke and John. But their knowledge of the Bible stops abruptly at that point. And even here, Murdock describes in a most fascinating way why these four Gospels were almost certainly not written in the order in which they currently appear, nor were they authored by the men whose names they bear, not even appearing in the historical record until over a century later!

Murdock provides a splendid and concise summary of the events described in each Gospel account and shows how they are inconsistent with each other in innumerable details. She also presents a spellbinding analysis of the so-called "secular historical references" to Jesus. In each case, she reveals how this extra-biblical "evidence" is completely lacking and how, incredibly, even these dubious "historical references" to Christ were authored by writers who weren't even born until years after Jesus' alleged crucifixion. Even charitably interpreted, therefore, the extra-biblical allusions to Jesus are second-hand hearsay, or twenty-fifth-hand hearsay, and are of no value whatever in determining the accuracy of the New Testament. The fact that there are no contemporary historical references to Jesus argues against his purported existence, especially in consideration of his astounding alleged acts and widespread fame as depicted in the New Testament, other facts emphasized in Who Was Jesus? As Murdock further demonstrates, the New Testament is internally inconsistent as well and showcases within its own pages the best possible evidence against its Divine origin. My very favorite chapter began on page 139: Questions About The Gospel Story. If the battle between atheism and Christianity may be described as a philosophical and theological war, then this chapter provides your invincible arsenal of weapons of mass destruction.

Ms. Murdock also describes Matthew's tale of newly resurrected corpses wandering the streets of Jerusalem following Jesus' crucifixion. Allegedly, these zombies popped back to life and walked away from their Jerusalem burial sites; yet there is not a single non-biblical historical reference to this unimaginably eye-popping event. Murdock points out that, in this instance-and in many other New Testament instances as well-the best explanation for the lack of outside references is simply that the biblical account was fabricated. Otherwise, we are left with the conclusion that no historian of the time considered such a mass resurrection of the dead to be noteworthy.

I really enjoyed reading this book. It was an easy and pleasurable read. Even though I've been interested in this subject myself for over thirty years, there was a great deal of information that I learned from Ms. Murdock's book. The book puts together the text of the New Testament with texts of extra-biblical sources and integrates them with common sense and logic. The result is that an objective reader is left with the conclusion that the Bible is simply false. Murdock has stated that she doesn’t tell her readers what to believe: She just presents the evidence. Perhaps so. But the evidence she presents is so compelling and so skillfully argued that the conclusion, it seems to me, is inescapable: Christianity is merely another ancient mythology, like Greek or Roman mythology. Murdock has devastatingly checkmated her theologically enslaved opponents in this debate.

I don't know whether the remainder of my comments (below) belong in a book review, but I'm expressing them nonetheless.

D.M. Murdock/Acharya S, like all authors on controversial subjects, has many critics. But they all share one commonality: They don't know what they're talking about. Murdock understands many languages and has a breadth of knowledge her critics cannot match. This fact irks the uninformed. Having given a fair hearing to some of her online detractors and their "rebuttal" videos, I have detected not only a lack of knowledge on the part of her critics, but also, in some cases, a thinly disguised misogyny. Objectively speaking, D.M. Murdock is an attractive and dazzlingly brilliant woman. This is more intimidation than some men can handle, even some atheist men. To those who follow the teachings of the Apostle Paul, who forbade women to even speak in church, it "logically" follows that Ms. Murdock should remain silent as well, especially since she is grieving the Holy Ghost. In plain English, Murdock is dealt criticism that would never befall an ugly old man in a monastery. I would like to think that 21st-century America is beyond such juvenile conduct, but that is sadly not the case.

If you live in America and you are considered a "mainstream intellectual," you may proffer the most absurd arguments imaginable-and they are considered all well and good. But if you're viewed as "outside the mainstream," you may proffer the most carefully prepared, incontrovertible evidence possible, and you will nevertheless be viewed cynically by those who cannot be troubled to think through the issues for themselves and who must instead rely upon "appeals to authority" (a logical fallacy). Murdock's critics invariably fall into this slipshod and errant category.

To summarize: D.M. Murdock's Who Was Jesus? Fingerprints of The Christ is unquestionably one of the finest and most enjoyable books I've ever read. It is thorough and scholarly, yet pleasurably provides invaluable knowledge on the most riveting of all subjects. I admire Ms. Murdock tremendously, as much for her personal courage and character as for her remarkable and vitally important volume.

Acharya S/D.M. Murdock
Author, "The Christ Conspiracy," "Suns of God," "Who Was Jesus?" and "Christ in Egypt"
http://truthbeknown.com/
http://stellarhousepublishing.com/
http://tbknews.blogspot.com/