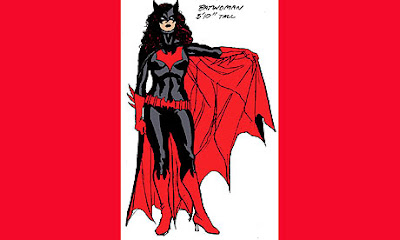 Fans at Comic Con in New York this week were treated to a sneak preview of DC Comics's highest profile gay superhero, Batwoman, described by her creator as "the kind of sexy that makes you think of a succubus with a very bad attitude".

With fiery red hair, a skin-tight leather cat suit and knee-high red stiletto boots - complete with a blood red bat symbol on her ample chest - Batwoman, the alter ego of Kathy Kane, is set to make her debut on bookshelves this June in Detective Comics 854. Her appearance follows the shock – apparent – demise of Bruce Wayne, the multi-millionaire philanthropist who has protected the streets of Gotham City as Batman since 1939.

Writer Greg Rucka said that Batwoman - who first appeared in 1957 but was killed off in 1979 - was "exceptionally cool".

"Yes, she's a lesbian. She's also a redhead. It is an element of her character. It is not her character. If people are going to have problems with it, that's their issue," he told Comic Book Resources. "Frankly, she should be judged on her merits."

Kane was first outed in 2006 when it was revealed that she was the former lover of Gotham detective Renee Montoya. She has made passing appearances in the comics since, with June's outing to be her most high-profile.

"Nobody has really seen her. They don't really know who this person is," said Rucka. "You are going to figure out what she does, why she does it and who she has to help her. I obviously get into what makes her different than Batman. They share a lot, more than including a bat. But they have different techniques and different approaches."

He expects readers to be shocked when they read the first issue. "I think people are going to fall out of their seats," he said, providing the first few pages of the comic at his blog.
Posted by Robalini at Sunday, February 15, 2009