Megan Fox is back on the market? SCORE! 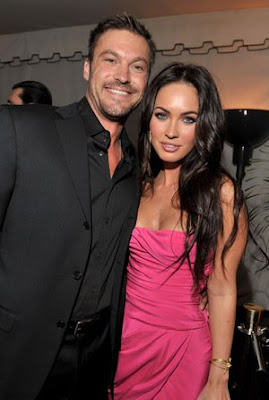 Photo is of Megan Fox with an ugly cancerous growth

File this under BEST NEWS EVER for girls and guys — and guys and girls — everywhere.

"The relationship had run its course," one of those chatty insiders tells Us. "They both realized the time had come to go their separate ways. It's completely amicable, and they are remaining friends."

The openly bisexual Fox, 22 (Mikaela in "Transformers: Revenge of the Fallen"), and Green, 35 ("Terminator: The Sarah Connor Chronicles") are "both focusing on their careers," the source adds.

Is that Hollywood publicist code for, "Yes, yes, she is going to be the next Lara Croft, and she can certainly do better than Brian Austin Green."

Oh dear. But about those tattoos they got of each other's names — paging Dr. Tattoff!

Maybe Megan could call Angelina Jolie for the name of the doc she had laser off her ex-husband Billy Bob Thornton's name.

These two do have a lot in common: multiple tattoos, fabulous bods, long dark hair, past lesbian sexual experiences ....

But it's kinda sad, because even in November, Fox talked about wedding plans.

"It's not going to be a big wedding," she told Us at a GQ bash. "I'm not one of those girls. If it happens, it will be very low-key and quick and unplanned."

Wait a minute. "IF" it happens? Was she was trying to tell us something.
Posted by Robalini at Friday, February 27, 2009

Check out this new Christian band that just released their first album.

From what I heard on the samples site, they sound really good.