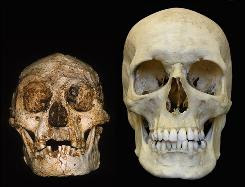 The setting was a hidden island filled with pint-size men who feasted on pygmy elephants and battled dragons. The story of paleontology's "Hobbits," the extinct human species called Homo floresiensis, packs plenty of drama.

But the 2003 discovery by an Australian-Indonesian of the undersize bones inside Liang Bua cave on the Indonesian island of Flores has long also suffered from a modern-day human rivalry. Add in the scientific back-story — a five-year feud over the whether the original inhabitants of Flores were actually a separate human species — and you have enough material for a novel.

The latest chapter of this story comes in the next Journal of Human Evolution, which boasts four reports concerning the hobbits— five years after discovery was first disclosed in the journal Nature. "Here we report the discovery, from the Late Pleistocene of Flores, Indonesia, of an adult hominin," wrote the authors of that 2004 paper in the formal language of scientists declaring a new species. ("Hominin" is what the cool kids among paleontologists say instead of "hominids" now, or what reporters call "human species." )

Incredibly these "hobbits" stood less than 40 inches tall and had brains about a third the size of modern humans, although they were buried with Stone Age tools, which indicates they had some smarts. "The combination of primitive and derived (modern-looking) features assigns this hominin to a new species, Homo floresiensis. The most likely explanation for its existence on Flores is long-term isolation, with subsequent endemic dwarfing," concluded the team led by Peter Brown of Australia's University of New England. The declaration made the bones of "Liang Bua 1," or LB1, described in the study the "holotype", basically the defining specimen of the new species, much like the fossil of " Lucy" defines the pre-human species Australopithecus afarensis, which lived 3 to 4 million years ago in Africa.

For something so sacrosanct, LB1's bones have enjoyed a rough few years, derided by critics such as Jochen Weber of Germany's Leopoldina Hospital as belonging to a microencephalic victim of a small-brained pathology, not a new species. Florida State University neuroscientist Dean Falk countered those claims in other studies, most recently in a 2007 Proceedings of the National Academies of Science paper that concluded, "Despite LB1's having brain shape features that sort it with normal humans rather than microencephalics, other shape features and its small brain size are consistent with its assignment to a separate species." The bones even departed from their home in Jakarta's Indonesian Centre for Archaeology without the permission of all of the discoverers, a move that left them damaged and pawns in the politics of paleontology in Indonesia prior to their return.

Another look at LB1's much-maligned noggin comes with the new Journal of Human Evolution papers in a study led by anatomical scientist Karen Baab of the Stony Brook (N.Y.) University Medical Center that examines the asymmetry of the skull. Critics of the new-species designation had pointed out the two halves of the skull are lopsided, suggestive of microencephaly. However, Baab's report concludes that "the cranium is fairly asymmetrical, but within the range of asymmetry exhibited by modern humans and all extant African ape species." Packed under 10 feet of wet mud, the skull likely became a bit distorted, a process called taphonomy by fossil researchers.

The whole microencephaly debate is nonsense, original team members such as Peter Brown have argued, as they have turned up bones, if not skulls, from about a dozen "hobbits" underneath Liang Bua Cave. The bones all display similar looks. A graveyard for stubby microencephalics in a cave on Flores strikes the discoverers as unlikely.

Two papers look at those "post-cranial" remains of LB1 and kin, in other words every thing but the skull. The hips, legs and feet of nine hobbits are examined in a paper led by William Jungers of Stony Brook University. And the arms, collar bones, wrists and fingers of six hobbits are described in another led by his colleague Susan Larson. Those bones "presents a unique mosaic of derived (human-like) and primitive morphologies, the combination of which is never found in either healthy or pathological modern humans." Larson's group reports. The leg bone finds indicate LB1 was most likely female. Overall, the bones most resemble those of Lucy, Australopithecus afarensis, suggesting they arrived at the island of Flores a very long time ago.

The latest papers include a better description of that cave, which concludes that whatever hobbits were, they ate a lot of Stegodon pygmy elephants. "There are at least 47 individual Stegodon represented in all excavated sectors of Liang Bua," the researchers write, describing findings from 10 holes that held remains from 95,000 to 17,000 years ago, when a volcanic eruption appears to have bumped off both elephants and hobbits.

Komodo dragon and giant stork remains also litter the cave, though there is less suspicion the hobbits preyed on those species. More likely they scavenged their carcasses. One thing the cave lacked was seashells, suggesting that hobbits were not big on surf and turf. "Homo floresiensis probably descended from a very early Homo erectus, or from Homo habilis, both human species that are not known to have used marine resources. Homo floresiensis probably did not have the right behavior to exploit marine resources (perhaps fear of entering the water, just like for instance orangutans)," says study lead author Gert van den Bergh of Holland's Nationaal Natuurhistorisch Museum Naturalis, by e-mail.

Or perhaps modern humans lived on the coasts and hobbits were "restricted to the more inaccessible interior of Flores and did not venture into the coastal areas," he says. "You see, still many unanswered questions remain."
Posted by Robalini at Tuesday, February 10, 2009

Email ThisBlogThis!Share to TwitterShare to FacebookShare to Pinterest
Labels: Australia

very useful read. I would love to follow you on twitter. By the way, did you hear that some chinese hacker had busted twitter yesterday again.