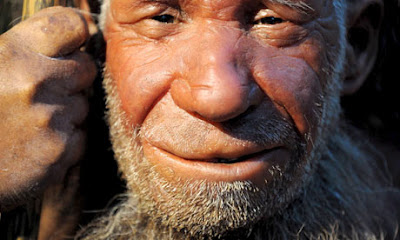 Scientists have unravelled the genetic make-up of the Neanderthal, the long-faced, barrel-chested relative of modern humans.

Anthropologists analysed more than a billion fragments of ancient DNA plucked from three Croatian fossils to reconstruct a first draft of the Neanderthal genome.

The extraordinary feat gives scientists an unprecedented opportunity to clarify the evolutionary relationship between humans and Neanderthals that may ultimately shed light on the great mystery of how we became the most formidable species on the planet.

Neanderthals were the closest relatives of modern living humans. They lived in Europe and Asia until they became extinct around 30,000 years ago. The reason they died out is not clear, but likely factors are dramatic swings in the climate that affected the availability of food, and competition with early humans.

By comparing the genomes of modern humans with Neanderthals and chimps, scientists hope to unravel the genetic differences that define what it is to be human.

The Neanderthal genome was built up from strands of DNA, most of which came from a 38,000-year-old fossilised leg bone unearthed in a cave in Vindija, Croatia. Other material came from older remains dating back 70,000 years. Together, the fragments make up more than 60% of the Neanderthal genome.

Svante Pääbo, who led the project at the Max Planck Institute for Evolutionary Biology in Leipzig, Germany, said the team would spend the rest of the year analysing the DNA. They will focus on genes linked to modern human evolution, such as FOXP2, which is involved in speech and language.

The draft genome was announced at the American Association for the Advancement of Science meeting in Chicago.

Two years ago, the same group used the ancient DNA to pinpoint the moment, about 500,000 years ago, when modern humans split from Neanderthals.

The analysis should clear up once and for all the ongoing debate as to whether Neanderthals and modern humans continued to mate with each other after separating along the path of evolution.

Remains of Neanderthals dating back to 400,000 years ago suggest they were proficient at crafting basic tools and weapons and buried their dead. The last Neanderthals died out shortly after Homo sapiens migrated to Europe and settled.

Neanderthals were stocky and well-adapted to a cold climate, with brains that were on average larger than those of modern humans. Some fossil evidence suggests they were occasionally cannibalistic, though they more commonly hunted large animals including horses and mammoths.
Posted by Robalini at Friday, February 20, 2009