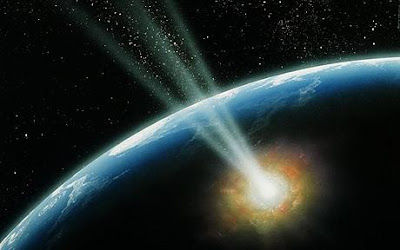 'Dark' comets happen when the water on their surface has evaporated, causing them to reflect less light

The comets, of which there could be thousands, are not currently monitored by observatories and space agencies.

Most comets and asteroids are monitored in case they start to travel towards earth.

But Bill Napier, from Cardiff University, said that many could be going by unnoticed.

"There is a case to be made that dark, dormant comets are a significant but largely unseen hazard," he said

Scientists estimate that there should be around 3,000 comets in the solar system, but only 25 have so far been identified.

"Dark" comets happen when the water on their surface has evaporated, causing them to reflect less light.

Astronomers have previously spotted comets heading towards earth just days before they passed.

In 1983 a comet called IRAS-Araki-Alcock passed at a distance of just 5 million kilometres, the closest of any comet for 200 years, but it was noticed just a fortnight beforehand.

Tests on another comet, called Comet Borrelly, in 2001 revealed it to have large dark patches across much of its surface.

Steve Larson of the University of Arizona's Catalina Sky Survey in Tucson, which monitors comets, said the idea of an unknown number of "dark" comets circling earth had "merit".

But Clark Chapman from the Southwest Research Institute in Boulder, Colorado, said that such comets "would absorb sunlight very well" and so could be detected by the heat they emit, reports New Scientist magazine.
Posted by Robalini at Thursday, February 19, 2009

Email ThisBlogThis!Share to TwitterShare to FacebookShare to Pinterest
Labels: Comet

That is a new kind of comet for me, I never before heard the word "dark comet", it sounds almost like a doomsday comet, many theories speak of falling rocks from the heavens for 2012.
sv77

Well if this is gonna happen, let it happen, it can't be helped, good luck in the after life.

Hello! nice article, So nice to find somebody with some original thoughts on this subject. Thanks for performing a public service!!