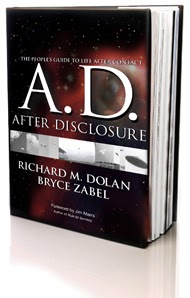 "This new book by Richard Dolan and Bryce Zabel is an important attempt to prepare us for what will one day be inevitable: an open understanding that we are not alone. Not in this universe, and not even on Planet Earth."
Edgar Mitchell, Sc.D, Apollo 14 Astronaut

"I've imagined this future many times, but these guys actually wrote the book on it! Zabel and Dolan have brilliantly created a compelling blend of history and informed speculation that makes their exciting world seem like tomorrow's news today. Don’t dare miss it! 'Nuff said."
Stan Lee, Creator, Spiderman, X-Men, Avengers

"What if the UFO cover-up is real and what if it ended? After Disclosure poses this fascinating question and looks at the societal consequences of such a revelation. Richard Dolan and Bryce Zabel have produced a thoughtful and provocative analysis that goes well beyond the usual scope of books on UFOs and alien life."
Nick Pope, Former Chief of UK Ministry of Defence UFO Desk

"You may not have ever considered what life will be like after the reality of UFOs becomes publicly known. But Richard M. Dolan and Bryce Zabel have. Their book is absorbing and thought provoking. Don't miss it."
Jim Marrs, New York Times Best Selling Author of Crossfire

"Considering the overwhelming evidence that Earth is being visited by alien spacecraft and that many intelligence agencies and military groups have known this to be true for some time, we certainly need to consider the serious question of what happens when Disclosure actually occurs. This book by Zabel and Dolan is the first in-depth attempt to answer that question. It is long overdue and sets a high standard of discussion about this very complex issue. Well worth reading."
Stanton T. Friedman, MSc., Nuclear physicist, Author of Top Secret/Majic, Science Was Wrong

"Micro-organisms on the moon, biological bacteria on meteorites, structures on Mars, and the recovery of mortal beings at Roswell have all paved the acceptance that we are not alone in the universe. And not since the Brooking Institute Study of the ramifications of contact with a higher intelligence off the earth has anyone demonstrated with such comprehensiveness just what type of a world society would wake up to on such a fateful day. Not until Dolan and Zabel. The contemporary research they have accumulated in this book should serve as a primer for present and future generations. Not only to soften the blow, but also to provide us with hope. Hope, that even though much that we have faithfully accepted as reality, forever changed, will still usher in a time when we can peer at our neighbors up in the stars, and not just over the next-door fence."
Don Schmitt, Co-Author of Witness to Roswell

"If Disclosure happens in my life, this is how I imagine it would occur. Richard Dolan and Bryce Zabel have left no stone unturned in capturing, in intricate detail, every aspect and every nuance of the events, the complexities and ramifications that would inevitably unfold with Disclosure. Thought provoking, highly imaginative, yet incredibly real. A must read for believers and skeptics alike."
Don Most, Producer, Majic Men

"I've always known there was a UFO conspiracy and this book confirms all my suspicions. Furthermore, these two authors -- Dolan and Zabel -- must be in on it! How else to explain the astounding level of insight and staggering detail this book offers on what is supposedly a hypothetical situation? If you ask me, A.D. After Disclosure is all part of the government's campaign to prepare us for the inevitable. But even if I'm wrong, these guys have done a masterful job imagining the unimaginable."
Brent V. Friedman, Writer/Producer; Co-Creator of Dark Skies
Posted by Robalini at Sunday, December 19, 2010