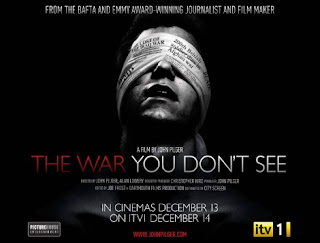 John Pilger’s Must See Documentary About the Truth of News Reporting in Afghanistan and Iraq
12.18.2010
Paul Gallagher

The War You Don’t See is a must-see documentary by Emmy-award-winning journalist John Pilger, who examines the news media’s failures, mistakes and crass ineptitude when reporting the truth about the wars in Afghanistan and Iraq.

In The War You Don’t See, Pilger, himself a renowned correspondent, asks whether mainstream news has become an integral part of war-making.

Focusing on the current conflicts in Afghanistan and Iraq, Pilger reflects on the history of the relationship between the media and government in times of conflict stretching back to World War I and explores the impact on the information fed to the public of the modern day practice of public relations in the guise of ‘embedding’ journalists with the military.

Featuring interviews with senior figures at major UK broadcasters, the BBC and ITV, and high profile journalists on both sides of the Atlantic, including Rageh Omaar and Dan Rather, the film investigates the reporting of government claims that Iraq harboured weapons of mass destruction.

Pilger also speaks to independent film makers, and whistleblowers, including the founder of Wikileaks, Julian Assange and to former senior British Foreign Office official Carne Ross to investigate why what he believes were key voices and key details did not figure prominently on the mainstream media’s agenda. The film also includes hard-hitting footage from independent media sources showing scenes in Afghanistan and Iraq, including footage leaked to Wikileaks.

Dan Rather, the famous CBS news anchor, and BBC World Affairs Correspondent Rageh Omaar both reflect on their own roles during the lead up to hostilities in Afghanistan and Iraq and the lessons they have learned. Rather speaks about pressure felt by journalists who face the danger of becoming what he calls mere ‘stenographers’. Rageh Omaar speaks about the proliferation of 24 hour news and the effects this has on war reporting, including his own experience reporting on the liberation of Basra.

Fran Unsworth, the BBC Head of Newsgathering and David Mannion, Editor in Chief of ITV News, both face questioning on their news departments’ reporting of the Iraq war and the scrutiny of George Bush and Tony Blair’s claims about weapons of mass destruction.

The documentary also focuses on the abuse of Iraqi civilians by British soldiers and speaks to Phil Shiner, a lawyer who is representing a number of Iraqi victims. It examines the notion that our media distinguishes between ‘worthy’ and ‘unworthy’ victims of conflicts and how.

The War You Don’t See also looks at the balance of the media’s reporting on the hostilities between Palestinians and Israelis, with particular focus on mainstream broadcasters’ coverage of the Israeli attack on the aid flotilla in Gaza earlier this year. Both the BBC and ITV are asked about the influence of Israeli government efforts to shape the reporting of such incidents on their coverage.

Now in his seventy-first year, Pilger has lost none of his investigative skill as journalist or any of his anger at injustice and falsehood, and while it can be argued that he has his own agenda, Pilger is a very much needed David, pitched against the dangerous Goliath of Fox News. As Pilger once said:

“It is not enough for journalists to see themselves as mere messengers without understanding the hidden agendas of the message and the myths that surround it.”
Posted by Robalini at Tuesday, December 28, 2010