The curse of Fallujah 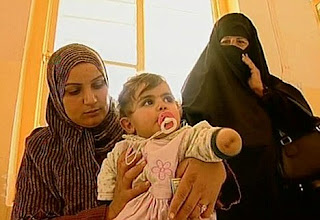 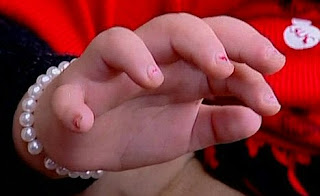 The curse of Fallujah: Women warned not to have babies because of rise in birth defects since U.S. assault
5th March 2010 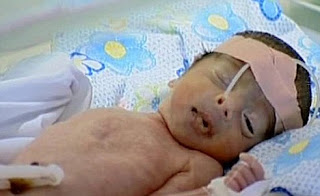 A high number of children are being born with birth defects in an Iraqi city where U.S. forces may have used chemical weapons during a fierce battle in 2004.

Children in Fallujah are being born with limb, head, heart and nervous system defects. There is even a claim that a baby was born with three heads.

The number of heart defects among newborn babies is said to be 13 times higher than the rate in Europe.

The city, 40 miles west of Baghdad, was the scene of some of the fiercest fighting of the Iraq war in late 2004. U.S. Marines led Operation Phantom Fury to recapture it from insurgents.

British troops were involved in manning checkpoints on the outskirts of the city as the Americans went in. The U.S. has admitted that it used white phosphorus in the attack, but only as an illumination device.

Under international law it is illegal if used as an offensive weapon. America has never given a clear response to claims it also used depleted uranium weapons against the insurgents, such as ‘bunkerbuster’ bombs. Both types of weapons can contaminate crops and water supplies.

‘We went to a clinic for the disabled, and were given details of dozens upon dozens of cases of children with serious birth defects,’ he said. ‘One photograph I saw showed a newborn baby with three heads.’

He said that while he was at a U.S.-funded hospital in the city, a stream of parents arrived with children who had limb defects, spinal conditions and other problems.

SHELLS WITH A RADIOACTIVE PUNCH

Radiation experts claim the birth defects have been caused by uranium. Depleted uranium, or spent nuclear fuel, is twice as dense as lead, making it an effective material for armour-piercing shells and bullets.

On hitting a tank or bunker, they disintegrate, with up to 40 per cent of the uranium, which is still radioactive, turning into fine powder.

Roger Coghill, a Government adviser on the health risks of radiation who has research labs in Gwent, said: ‘The particles are so small that they don’t fall back to earth, they hang around in the atmosphere and are still very deadly years after the conflict.’

The dust particles are not only poisonous, they can enter the bloodstream and become lodged in the lymph glands from where they emit radiation that could cause cancer.

Chris Busby, an Ulster University expert in the effects of radiation, said the uranium particles can also wreck the DNA of sperm and eggs produced by contaminated adults – causing a multitude of birth defects in any baby they conceive.

Professor Busby, who is also co-founder of environmental consultancy Green Audit, said: ‘White phosphorus is not something that specifically damages the DNA.

‘But depleted uranium, normal uranium and enriched uranium are all mutagens and cause birth defects at quite small concentrations.

A British-based Iraq researcher, Malik Hamdan, told the BBC that Fallujah doctors were swamped by a ‘massive, unprecedented’ number of heart defects and other problems.

Figures from a city doctor from 2003, before the war, showed she was dealing with one birth defect every two months at that time, but was now seeing at least one case a day.

Simpson said that the worst problems appeared to be in a part of the city which was at the heart of the resistance to the Allies.

Fallujah became infamous after the burned corpses of four U.S. contractors were dragged through the streets in March 2004. Rebel leader Abu Musab al-Zarqawi had gathered up to 5,000 rebels there.

It was encircled by U.S. forces, along with the Black Watch Regiment, to ensure no rebels escaped. However, civilians were encouraged to leave and up to 90 per cent of the 300,000 population did so.

The attack began late on November 7 and by November 16, U.S. officials announced that Fallujah had been cleared. The battle cost America 51 dead but up to 1,400 gunmen were killed.
Posted by Robalini at Tuesday, December 28, 2010