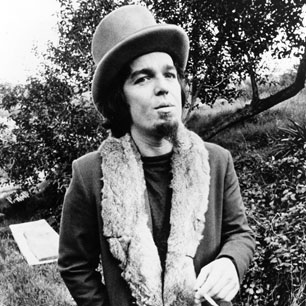 Don Van Vliet, who became a rock legend as Captain Beefheart, died today from complications from multiple sclerosis in California. His passing was announced by the New York-based Michael Werner Gallery, which represented his work as a painter.

His Trout Mask Replica was Number 58 on Rolling Stone's list of the 500 Greatest Albums of All Time. In a 1969 review, Lester Bangs called Trout "a total success, a brilliant, stunning enlargement and clarification of his art."

"Don Van Vliet was a complex and influential figure in the visual and performing arts," the gallery said in a statement. "He is perhaps best known as the incomparable Captain Beefheart who, together with his Magic Band, rose to prominence in the 1960s with a totally unique style of blues-inspired, experimental rock & roll. This would ultimately secure Van Vliet's place in music history as one of the most original recording artists of his time. After two decades in the spotlight as an avant-garde composer and performer, Van Vliet retired from performing to devote himself wholeheartedly to painting and drawing. Like his music, Van Vliet's lush paintings are the product of a truly rare and unique vision."

Van Vliet leaves behind a wife, Jan. The two were married for more than 40 years.
Posted by Robalini at Tuesday, December 28, 2010