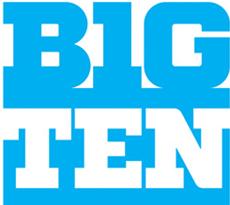 The Big Ten Conference unveiled Monday its new logo for a 12-member league beginning with the 2011-2012 school year when Nebraska joins and announced division names for football.

"Like anything new, it'll take time to get used to," Big Ten commissioner Jim Delany said on the Big Ten Network of the logo, which keeps the Big Ten name and replaces the "I" in BIG with the number 1.

The new logo for the Big Ten, as unveiled by the conference in a news conference Monday.CAPTIONCourtesy of Big Ten
The two football divisions will be Legends and Leaders.

"We decided to look to our history and our future," Delany said of deciding on division title names.

Legends and Leaders may sound generic, but division alignments didn't lend themselves to using north, south, east or west.

"Then I think to get more specific on divisional names, associating them with a coach or player, we have a treasure trove of legends," Delany said. "It seemed to be too exclusive and not inclusive enough."

The Legends division will have Iowa, Michigan, Michigan State, Minnesota, Nebraska and Northwestern.

The league announced alignments in early September. They will exist in football only.

In addition to playing other division members, each school will play three crossover games against teams from the other division. Guaranteed cross-division matchups are Illinois-Northwestern, Indiana-Michigan State, Ohio State-Michigan, Penn State-Nebraska, Purdue-Iowa and Wisconsin-Minnesota.

Next season the winner of each division will meet in the league's first championship game Dec. 3 at Lucas Oil Stadium in Indianapolis. That will determine the Big Ten champion and the conference's participant in the Rose Bowl or Bowl Championship Series national championship game.

The winner of the league title game will receive the Stagg-Paterno championship trophy, named for the late Amos Alonzo Stagg, who coached one-time league member University of Chicago from 1892 to 1932, and Penn State coach Joe Paterno.

The most valuable player of the game will receive the Grange-Griffin trophy, so named for the late Harold Edward "Red" Grange, who starred at Illinois, and Archie Griffin of Ohio State, the only two-time Heisman Trophy winner.
Posted by Robalini at Tuesday, December 21, 2010

Email ThisBlogThis!Share to TwitterShare to FacebookShare to Pinterest
Labels: Football