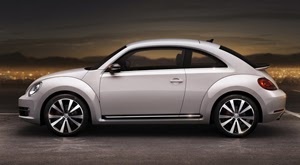 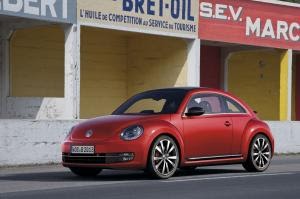 Since November, we've only seen a silhouette shot of the 2012 Beetle along with a pretty interesting Super Bowl commercial that teased the vehicle. Now, Motor Trend has broken the 8AM embargo on the '12 Beetle announcement and posted pictures and information on the vehicle.

The '12 Beetle is clearly an evolution of the current model that burst onto the scene the United States in 1998. The roofline is less circular and carries on a more "chopped top" look first seen on the New Beetle Ragster concept in 2005 (the roof is lower by half an inch). The front of the '12 Beetle carries on with the familiar large "eyes", while the lower grille is more in keeping with more conservative models in the Volkswagen lineup like the '11 Jetta and the '12 Passat.

Email ThisBlogThis!Share to TwitterShare to FacebookShare to Pinterest
Labels: Volkswagen