The Cast Of 'The Big Lebowski' Reunites in New York 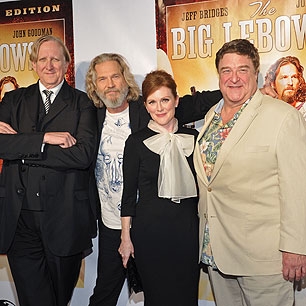 Sound problems and a rambunctious crowd made for a challenging but hilarious tribute to the fan-favorite film
Andy Greene
August 17, 2011
http://www.rollingstone.com/movies/news/the-cast-of-the-big-lebowski-reunites-in-new-york-20110817

When The Big Lebowski hit theaters in March 1998, few people could have imagined it would quickly become one of the biggest cult films of all time. Most critics dismissed it as a disappointing follow-up to Fargo – and it got creamed at the box office. Here's a list of movies that had higher grosses that first weekend: the twelfth week of Titanic, the fourth week of The Wedding Singer, U.S. Marshals, Twilight (the widely forgotten Paul Newman film noir) and Hush. If you don't remember Hush, it's that awful Gwyneth Paltrow thriller where she's pregnant and Jessica Lange is trying to kill her.

Well, nobody is dressing up like a pregnant Gwyneth Paltrow and headed to Hush Fest these days – but every year thousands of young men (and the occasional woman) dress up like characters like The Big Lebowski to bowl and drink White Russians at Lebowski Fests all over the country. Tuesday night at New York's Hammerstein Ballroom, the entire main cast reunited to celebrate the release of the movie on Blu-ray and participate in a panel discussion. Achievers (the preferred nomenclature for Lebowski fans) travelled from all over the country for the celebration.

On paper, this is the outline for an amazing night. Unfortunately, the panel discussion didn't go very well. The sight of Jeff Bridges, John Goodman, Steve Buscemi, Julianne Moore, John Turturro and musical supervisor T-Bone Burnett together again was awe-inspiring – but group interviews are notoriously hard to carry off. Factor in thousands of drunken fans screaming out lines from the movie every three seconds and endless sound problems that made it near-impossible for the panel to hear anything, and you have a borderline disaster. Entertainment Weekly writer Clark Collis was a trooper as moderator and did his best to navigate through the chaos, but you could see his frustration boiling over as the night went on. During a forty-minute discussion, he was able to ask about five or so questions to the panel.

That isn't to say that the discussion didn't have its moments. The cast members all told hysterical stories about being accosted by obsessed fans in the streets, John Turturro shared his plans for a sequel about Jesus becoming a bus driver and Buscemi shared his theory that Donnie is actually just a figment of Walter's imagination. The whole cast said they would be happy to participate in a sequel, though John Goodman took everybody back to reality by saying there was no chance it would ever happen. Nobody could quite explain why the Coen Brothers have been so reluctant to embrace the movie.

I had the pleasure of sitting extremely close to James Hoosier, who had a bit (but highly memorable) role as Jesus' bowling partner Liam O'Brien. Lebowski Fest organizers Will Russell and Scott Shuffitt introduced him to the crowd early in the night, and he was more than happy to recreate his famous belly shake for the crowd. He wore an O'Brien/Quintana bowling jersey and seemed delighted to mingle with the fans. He stuck around for the movie, and soaked in thunderous applause every time he was on the screen. The very instant his initial scenes were over, he got up and left.

In many ways, viewing the movie for the millionth time was more enjoyable than watching the panel discussion. The crowd's drunken catcalls became endearing, and we all sang along to "The Man In Me" and screamed out "shut the fuck up Donnie!" in unison. Tiny details that don't register during the first 30 screenings become hysterical – like the fact that The Dude has book called Japanese Cooking in his apartment or that The Dude is singing the theme song to Branded (an actual 1960s western) while in the back of the police car. I had honestly only planned on staying for a bit of the movie so I could go home and write this, but before I knew it I was singing along to the Townes Van Zandt cover of "Dead Flowers" while the end credits rolled.