Alien ET Cities You Can Visit On Earth Now 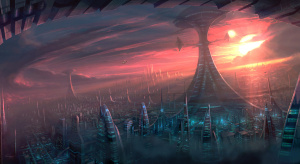 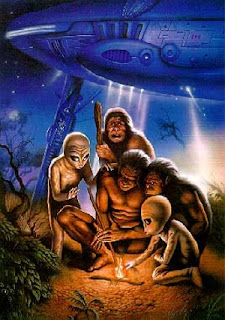 Ever dream of visiting alien worlds and studying their amazing wonders? Well, you don't have to leave Earth to do that—you can travel right now to cities where aliens visited, even lived.

Walk the pathways along many of Earth's ancient cities and you're walking in the footsteps of the gods. At least that's what the legends and myths of the civilizations that seem to have sprung from nothing overnight record in their earliest records.

Anthropologists agree the human race is at least two million years old and ancient Man was much like us more than one million years in the past.

Mankind and help from the stars

So, why did the human race scavenge like animals and live in caves and the hollows of trees—supposedly for 990,000 years—if humans back then were so much like us?

While some evidence exists that supports the idea that humans had advanced civilizations as far back as 100,000 years ago, that still leaves uncounted some 900 millennia where human beings made very little progress in anything important.

Were they that stupid?

Perhaps they were. Perhaps real advancement didn't start happening until extraterrestrials appeared. Researchers like Erich von Däniken and others have argued as much while being viscously attacked or mocked by debunkers, self-styled skeptics, and orthodox science.

Why humans seem so ignorant for so many hundreds of thousands of years remains a mystery, but clues to the rise of civilization are filled with testimonies of interaction with aliens from the stars starting about 8,000 years ago and continuing through the millennia into the records of religious writings by the ancient Indians and Hebrews.

While modern scientists and archaelogists shrug off what some ancients believed important enough to paint onto or carve into stone for posterity—or to include in their religious texts—remnants of impossible architecture and artifacts that hint at other worlds cannot be easily dismissed…unless a lucrative research grant is at stake.

Ancient manuscripts, scrolls, glyphs and cylinders recorded human meetings with Sky Gods—beings that came from the stars to help Mankind build (or rebuild) civilizations. Did they tame the Earth, erect massive monuments and construct the world's first cities?

Five of the most fascinating alien cities still exist: the earliest human civilizations guided by the all-powerful gods from the stars.

You can visit these amazing alien cities because they're still right here on Earth. 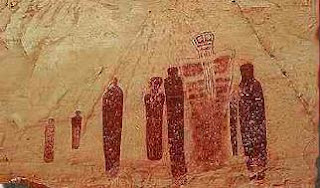 Where the Hopi came from is a mystery to scholars. Academics theorize the Southwestern natives originated from the earlier Anasazi. The Hopi deny this, however, calling the Pueblo people Hisatsinom: The Ancient People. 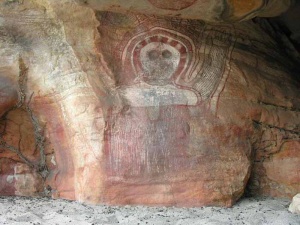 The Hopis explain their ancestors arrived from deep within the earth, ascending upwards through massive caverns called kivas to the surface, The Fourth World.

Hopi art and myth is bursting with images and imagery of otherworldly contact—not only with a rich spirit world, but also with advanced beings from other worlds.

Because their origin mythology is interlaced so tightly with actual alien contacts it is sometimes difficult to separate the two. But there's little doubt the early Hopi did have some contact with ETs, as did other Mesoamerican tribes such as the Anasazi, Olmecs, Incas, Mayans and Aztecs. 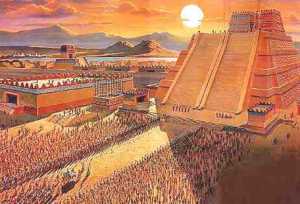 Rising from the fall of the mighty Mayan civilization that preceded it, the Aztecs were to the Romans, as the Mayans were to the Greek city states.

The Aztec origins were built upon much of the earlier Mayan knowledge including the Mayan records that bluntly stated: "Men came from the stars, knowing everything, and they examined the four corners of the sky and the Earth's round surface." [From the Mayan Popol Vuh text]

Today you can walk the ruins of the magnificent city, sift through the centuries with your fingers, and walk the pathways where men once commiserated with gods from the stars.

With an estimated population of 250,000 to 1.5 million people, Tiwanaku has no surviving written history. Its power and influence peaked around 700 A.D., but it's origins are believed to go far back into time.

A power of the Andes, like the amazing Incas that preceded them, the people of Tiwanaku believed that gods from the sky taught them survival skills.

The few records that survive suggest E.T.s shared with them some of the secrets once taught the mighty Incas…or so their legends claim. But what did they know, right? They only lived through the experience. 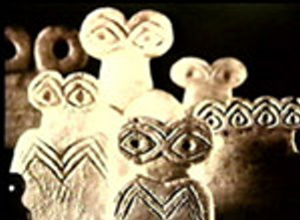 The fabled Babylon, at one time the virtual center of world civilization may owe its existence to the Sumerians. The Babylonians borrowed heavily from Sumer, adopting parts of their culture and technology in a fashion similar to Rome's adaption of the Greek culture thousands of years later.

The Babylon mysteries continue to confound: their knowledge of batteries, advanced mathematics, belief that superior beings lived on planets orbiting other star systems. Where did they come upon such knowledge in the 23rd Century B.C.?

How did they know all this?

Much of what the Babylonians knew they adopted from ancient Sumer. The Sumerians knew. They had the first-hand, original knowledge because they met and lived with with the Sky Gods.

Paleocontact, according to the research of Zacharia Sitchen—that literally fills volumes—involves a vastly superior race that contact with the people of Sumeria. These aliens helped build Sumer's culture and steer the Sumerian people towards a higher level of learning and technology.

The Sumerians were the first people on Earth to develop writing enabling them to chronicle their advancements and history and—perhaps most importantly—document their contact with alien intelligences for posterity.

Although paleocontact's been researched extensively, the works and conclusions drawn by its two leading proponents, von Däniken and Sitchen, are mostly dismissed by academics and not taken seriously.

Yet the records tell a tale of meetings and interactions with advanced beings from the stars. The evidence survives to this day in fragile cylinder seals, stunning artwork, and the rich tapestry of Sumerian mythology...myths built upon contact with extraterrestrials.

This translated excerpt from one of the Babylonian texts relates an episode where one of the female ETs takes a new Earthman as her husband and elevates him to the ruling class. She boasts that his power will be greater than a "Power-Weapon" that curiously sounds like a high energy laser or beam weapon:

"I have cast for you the spell, exalting you in the Assembly of the gods.
To counsel all the gods I have given you full power.
Truly, you are supreme, you are my only consort!
Your utterance shall prevail over all the Anunnaki!"
She gave him the Tablet of Destinies, fastened on his breast:
"As for you, your command shall be unchangeable, your word shall endure!"
As soon as Kingu was elevated, possessed of the rank of Anu,
they decreed the fate for the gods, his sons:
"Your word shall make the first subside shall humble the `Power-Weapon,' so potent in its sweep!" [Enuma Elish ("When on high...")]

The city of Babylon, heir to Sumer and the Land of the Sky Gods, can still be visited. Mostly a giant mound with ruins spread from central radial points, what was Babylon is in present-day Al Hillah, Babil Province, Iraq some 55 miles south of Baghdad.

China is the focus of legends, myths and stories of alien visitations and many of them center on the Xianyang pyramid.

Local villagers claim their distant ancestors spoke of sky great ships that navigated the heavens and used the pyramid as a landing, refueling and resupply site.

20th Century historians have called the early Chinese culture an "enigma wrapped in a mystery."

Tales of China's ancient days are crammed with stories about the "sky people" and the "god-men" who came from the stars using the Earth as a base for exploration.

Along the way these beings taught some of the primitive peoples they met the basics of technology, engineering, farming, and the complex structure of the universe.
Posted by Robalini at Friday, December 02, 2011