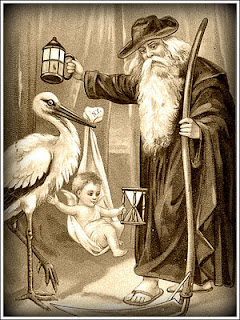 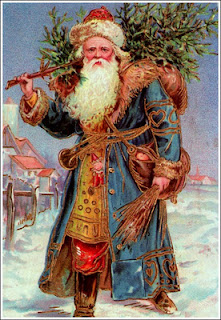 I, Marcus, was walking down the Appian Way one day just outside of Rome. The date? Just prior to midwinter. The year? Oh, about 1009 A.U.C. (For you barbarians out there, this stands for anno urbis conditae - we in the empire count our years from the founding of our great city.)

Like many of my countrymen, I was preparing to celebrate the Saturnalia, a weeklong feast in homage to Saturn, the father of our great god Jupiter. My children were particularly looking forward to the school holiday, and I had procured a few gifts for them, as is the tradition. Myself? I was more eager to gamble a bit, as the ban on such wagers is lifted during the holiday.

"So," I joked with him, "you have taken the Saturn out of Saturnalia?"

But he just scoffed at me and went on his way. I could not help but think to myself that it was his loss. This Chrestus of his seemed like something of a killjoy.

Fast forward to the year 2764 A.U.C. - today, that is. The annual debate over how to greet someone on the streets is in full swing once again, except now, the shoe is on the other foot (which makes foot-in-mouth syndrome a little more painful).

The followers of Chrestus are in the majority these days, and very few people celebrate the Saturnalia anymore. The only consolation for the poor, neglected Saturn is that his image - that of an aged man with a flowing white beard - lives on in the form of a jolly old "elf" by the name of Santa. Quite a comedown for the father of Jupiter, but I suppose it's better than nothing. At least he still has a day and a planet named after him.

Instead of joking about taking the Saturn out of Saturnalia, however, many Christians are grousing about others taking the Christ out of Christmas, as their holy day has come to be called. Some of them have even compiled a Naughty or Nice list of retailers who who don't (naughty) and do (nice) make liberal use of the term "Christmas" in their advertising and store displays. It's hard to overlook the irony that the very phrase "naughty or nice" is associated not with Christ but with Saturn ... er ... Santa.

It's also hard not to chuckle at the vehemence with which Protestants defend the term Christmas. If you do take the Christ out of Christmas, what's left? Mass, that's what. And Mass is a ritual that is exclusively Catholic. Its central feature is the Eucharist, which involves partaking of a wafer and wine that Catholics believe literally become the body and blood of Christ. Protestants generally don't believe this (they view the ceremony in symbolic, rather than literal terms). And the Catholic Church discourages other Christians from taking part in the rite.

U.S. bishops have issued the following guidelines for receiving the Eucharist: "Because Catholics believe that the celebration of the Eucharist is a sign of the reality of the oneness of faith, life, and worship, members of those churches with whom we are not yet fully united are ordinarily not admitted to Communion."

So Christmas - at least by that name - isn't a Protestant holiday at all. It's a Catholic one. It seems just a bit peculiar that Protestants, who have fought wars with Catholics over other seemingly trivial issues, should so readily accept - and so eagerly defend - a Catholic holy day! Shouldn't they call it "Christbirth" or some such?

The fact is, whether the name "Christ" or the word "Mass" is included in the name of the holiday doesn't really matter. Christians in other parts of the world get by just fine without referring to either Christ or the Mass at this particular season. For those who converse in Spanish, the typical greeting is "feliz Navidad," and the French wish one another a "joyeux Noel." The name of Christ isn't mentioned in either saying. In fact, noel comes from the Latin root natalis, which meant simply "birthday." Navidad, meanwhile, is related to the word "nativity," meaning "birth" - and stems from a related Latin root.

Whose birth? In modern parlance, the word nativity has come to be intimately identified with the birth of Christ. In the third century, however, a typical Roman using the word natalis at this time of year might have assumed you were talking about the god Mithra, who was also said to have been born on Dec. 25. Or perhaps Sol Invictus, the "invincible sun," which was at its weakest during the winter solstice and from that point forward began to grow stronger - or be reborn.

Enter Old Man Winter, who was known to the Romans as our friend Saturn and to the Greeks before them as Cronos - or "Father Time." Cronos was the father of Zeus, and his name literally meant "time."* It's preserved at the root of our modern words chronology and chronicles. To us, he's Santa Claus. Each year he gives way to the Baby New Year, who bears a remarkable similarity to Christ. That's why Santa and Christ belong together. It would be unseemly to greet a new solar year without saying a proper goodbye to the old.

But just how should we do so?

Different people celebrate this season in different ways. It all depends on one's perspective. And that's exactly the point - yes, I'm finally getting to it - of this article. Those who insist that "Merry Christmas" is the only proper greeting for this holiday wouldn't have enjoyed being on the other end of the stick back when the Saturnalia was all the rage. I'd wager they wouldn't have been particularly comfortable with all the "Io, Saturnalia!" greetings going around. In the same way, Jews, Muslims, Pagans, Hindus, Buddhists and others might not care too much about being wished a merry Christmas.

This is especially true for Jews and many Pagans, both of whom celebrate their own sacred days - Hanukkah and Yule, respectively - at this time of year.

The idea behind more general salutations such as "happy holidays" and "season's greetings" is respect. It's an admission that, hey, I don't know what holiday you happen to celebrate, but whatever it is, I hope it's a good one! How can someone complain about that? If you know someone else is a Pagan, wishing that person a merry Christmas can be an insult - it's a refusal to honor and recognize that person's right to celebrate the season as he/she pleases. The same goes for a Jew who wishes a Christian a happy Hanukkah.

If you think about it, it's absurd. It's like an American wishing everyone in Beijing a happy Fourth of July. It's like telling someone who doesn't like football to "enjoy the Super Bowl!" Or buying a litter box for someone who doesn't own a cat. Such salutations are superfluous at best, insulting at worst. So why should we think wishing a Jew "Merry Christmas" is any different?

When it comes right down to it, shouldn't our wishes be determined by the other person's tradition? Should we go around saying "Io, Saturnalia!" to Christians or "Happy Hanukkah" to Buddhists? Or wouldn't it be better to honor the traditions of others, just as we'd like them to honor ours? When it comes down to it, that's pretty much what the Golden Rule is all about. And that's something at least Christians should be able to live with.

* Editor's note: Cronos is traditionally depicted as carrying a scythe or sickle, much like the grim reaper. In Greek mythology, this referred to the fact that he had castrated his father in order to claim the throne of the gods. This probably explains why Santa carries around a bag of toys rather than a sickle. The moral of the story: Children shouldn't play with sharp objects.
Posted by Robalini at Friday, December 02, 2011

Email ThisBlogThis!Share to TwitterShare to FacebookShare to Pinterest
Labels: Christmas