It Was a Pleasure to Burn... 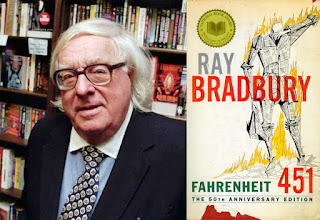 Robalini's Note: This story is important, at the least symbolically. While Amazon has never come out and said it, the name of their e-book reader (Kindle) and their new Tablet (Kindle Fire) pay homage to Bradbury's classic tale and are litkely a tribute. Thanks to Amazon (and Barnes & Noble, as well as the Internet itself) we live in an age where literal paper books may eventually become a relic of the past...

Simon & Schuster released an e-book edition of Ray Bradbury's science fiction classic "Fahrenheit 451" on Tuesday. First published in 1953, "Fahrenheit 451" is a dystopia in which reading is banned and it is the job of firefighters to burn books. 451 degrees Fahrenheit is the temperature at which paper burns.

The irony of releasing an e-book edition of a novel built around the death of print books was not lost on Bradbury, which is why he resisted the e-book idea. The Associated Press reports that the author was dismissive of the form, saying that e-books "smell like burned fuel." Bradbury, a noted futurist who at one time was a consultant for NASA, told the New York Times in 2009 that the Internet is "meaningless; it's not real.... It's in the air somewhere."

But the 91-year-old author has since changed his mind -- about e-books, at least. Hence "451" is available to digital readership.

“It’s a rare and wonderful opportunity to continue our relationship with this beloved and canonical author and to bring his works to new a generation of readers and in new formats,” Simon & Schuster publisher Jonathan Karp said in an announcement.

"Fahrenheit 451" has sold more than 10 million copies. It has been published in 33 languages in 38 countries and has never gone out of print. Simon & Schuster will also release a new paperback version of the novel in January, followed by new paperback editions of Bradbury's short story collections "The Marian Chronicles" and "The Illustrated Man" in March. “We are honored to be the champion of these classic works,” Karp said.

The e-book edition of "Fahrenheit 451" is now on sale for $9.99 from all major e-book retailers. It may be the perfect book to read on your Kindle Fire.
Posted by Robalini at Friday, December 23, 2011