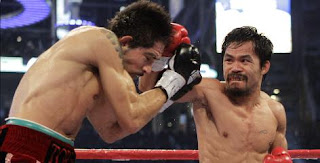 ARLINGTON, Texas — Manny Pacquiao proved beyond a doubt Saturday night what most people believed coming into his super welterweight championship fight against Antonio Margarito – that size doesn't matter as much as speed and quickness. And heart.

Pacquiao, 17 pounds lighter than Margarito at the opening bell, had too much of everything for Margarito and won going away at Cowboys Stadium before a raucous crowd of 41,734 and extended his record eight different weight divisions in which he has won world championships. Nobody else has more than six.

Pacquiao (59-3, 39 KOs) put on a boxing clinic, dominating the fight from start to finish, landing combinations at will as Margarito could not protect his face. By the end of the fight, Margarito's face was a bloody, swollen pulp. But he never gave up.

"I was looking for a chance to stop the fight in the 10th round," said Pacquiao. "But Margarito kept fighting back."

In the 11th round, Pacquiao said he asked the referee to stop the fight. "My opponent looked bad, I wanted him to stop it," Pacquiao said. " I said, 'look at his face. ' I didn't want to damage him permanently. That's not what boxing's all about."

Pacquiao's trainer, Freddie Roach, though, criticized Margarito's handlers, saying they should have stopped the fight by the eighth round.

He was really hurt," Roach said. "He might never fight again. He has the worst corner. His corner ruined his career."

Roach said he thought Pacquiao won all but one round. "I wish we'd knocked him out, but he's a very tough guy," he said.

Pacquiao said Margarito hurt him a few times when he was up against the ropes in the middle and later rounds. "He hurt me in the belly and in the face," Pacquiao said. "He's tougher than I thought.

"It was a hard fight. I did my best to win that fight. I can't believe I beat someone that strong and big."

At his post-fight press conference, Pacquiao called it the toughest fight of his career, and said he was hurting all over.

Margarito gave Pacquiao his props afterwards. "He's the best fighter in the world," Margarito said of the Filipino champion and congressman. "He's just too fast. It's hard to land a punch on that guy."

Pacquiao's trainer, Freddie Roach, said coming into the fight that Pacquiao would unload on Margarito because the Mexican was not quick enough to stop them. And he was right. Pacquiao's punches came in bunches, and from every angle imaginable.

Asked about fighting Floyd Mayweather, Pacquiao said, "If it happens it happens. If not, I'm satisfied with my career, but that fight would be great for boxing."

Pacquiao said he would put on a concert next week in Lake Tahoe.

There was drama before the fight even started. Roach watched like a hawk as Margarito had his hands wrapped.

In a game of one-upmanship, Margarito's handlers complained about the way Pacquiao's hands were wrapped.

There was even talk about Margarito trying to taking a banned substance, Hydroxycut is a weight-loss supplement that increases energy.

The WBC super welterweight (154-pound) title fight was fought at a catch weight of 150 pounds. Margarito weighed in at an even 150 pounds Friday, while Pacquiao caused a buzz by weighing in at 144.6 pounds. At fight time, Margarito re-hydrated to 165 pounds, while Pacquiao came in at 148.

Margarito was fighting for the first time in the United States since he was suspended for using illegal hand wraps before his fight against Shane Mosley on Jan. 24, 2009. Mosley ended up winning that fight by ninth round TKO. Margarito, 32, from Tijuana, Mexico, has fought just once since then, winning a unanimous decision against Roberto Garcia in Mexico on May 8.

Margarito stirred more controversy this week when a video was released this week on YouTube that showed Margarito, his trainer Robert Garcia, and lightweight fighter Brandon Rios mocking Roach, who suffers from Parkinson's Disease. The fighters appeared to be mocking Roach's symptoms of the disease.

Garcia, who trains both Margarito and Rios, apologized along with his fighters, and Roach accepted the apologies. But there has been much hard feelings between the camps.
Posted by Robalini at Friday, November 26, 2010