Money Grows on the Tree of Knowledge 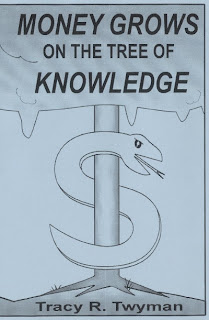 http://quintessentialpublications.com/moneytree.html
Money Grows on the Tree of Knowledge

Tracy R. Twyman's latest work on the esoteric history of money. Learn how the modern-day alchemists who control our economy create fool's gold out of nothing. These masters of illusion have tricked us all into sacrificing our own youth, and that of our own children, by convincing us that "time is money."

Pierce the veil! Glimpse the hidden truth about the history of money and the secret science of alchemy! In this volume, Tracy R. Twyman reveals how the entire global economy is based upon the principles and processes of this ‘Royal Art.’ Discover the connections between economics and ghastly rituals from the past that include child sacrifice, eating human flesh, and bathing in blood. Learn the occult origin of the dollar symbol, and the truth about the mysterious demon named ‘Baphomet’ who helped the Knights Templar to invent the banking system. See what arcane magic is at work in such things as the Federal Reserve, the Social Security system, free trade, taxation, the minimum wage, the fiscal year, and consumerist Christmas. Unlock the mystery of the Golden Age of Saturn, a time of prosperity and peaceful anarchy that purportedly existed in the past, and will come again, perhaps sooner than we could ever be prepared for.

This booklet is printed in an exclusive limited edition of 200 hand-numbered copies autographed by the author. It comes with a FREE DVD with the first 26 episodes of Tracy R. Twyman's notorious podcast about esoteric economics and psycho-politics, The Invisible Hand, compiled in mp3 format. Right now, for a limited time, we are offering these items together for $14.95 with FREE SHIPPING to the US & Canada! ($5 for international orders.)

For a limited time only, get Money Grows on the Tree of Knowledge + The Invisible Hand compilation DVD, along with Tracy R. Twyman's classic book on alchemical economics: Solomon's Treasure: The Magic and Mystery of America's Money: (a $20.00 value) for a total of just $29.95 with FREE SHIPPING to the US and Canada! ($7 for international orders.)

It is commonly known that the United States was founded by men with a philosophy grounded in the occult: namely Freemasons who saw in the US a potential "New Atlantis", which would guide the nations towards a New World Order of peace, democracy, and enlightenment. But what few people understand is the correlation between the esoteric doctrines of Masonry and the economic principles that underpin the American economy. Few understand that the dollar is a unit of magical energy, and the dollar bill itself a magical talisman. Although many words have been written by conspiracy theorists analyzing the Masonic symbols on the one dollar bill, no one has yet been able to sufficiently explain why these symbols are there, or what they really mean.

Solomon’s Treasure explains how the magic of the dollar operates. The creation of money by the Federal Reserve, and its exponential multiplication by the procedures of the banking system, is analogous to the creation and multiplication of gold in the metaphysical "science" of alchemy. The members of the Federal Reserve Board are in many ways like sorcerers, conjuring wealth seemingly out of thin air and distributing it at will to transform the American economy according to their desires. The dollar is "fiat currency", declared into existence by the central bank in a manner similar to the creation of the universe by the divine words "Let there be light!"