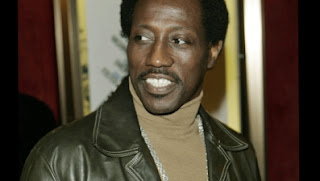 Wesley Snipes Ordered to Serve Three Years in Prison
11/19/2010
The “Blade” actor was hoping to receive a new trial after lawyers received jurors’ emails claiming other members had predetermined his fate.

A federal judge rejected actor Wesley Snipes' wish for a new trial and ordered the Blade star to serve out his three-year prison term for tax-related crimes, the Orlando Sentinel reports.

The Orlando-born Snipes was convicted in 2008 of failing to file federal tax returns. The prosecution said the actor attempted to avoid paying millions in taxes and obstructed the IRS.

Snipes' lawyer Daniel Meachum said in an email to the Orlando Sentinel that the decision "is just shocking," adding that his client "is very disappointed but staying strong and positive."

Two jurors sent emails to Snipes' lawyers alleging that other members made the conclusion that he was guilty before the trial officially started. Meachum also believed that one of the witnesses Kenneth Starr, who recently pleaded guilty to fraud, gave a "tainted" testimony against Snipes.

"We were hopeful that he had convinced Judge Hodges that the government's witness, Ken Starr, had perjured himself and that the government knew of his criminal activities and the predetermined minds of three jurors, but we obviously fell short in accomplishing that," Meachum said.

Snipes could challenge Hodges' ruling and ask the Supreme Court to review the case, though he would most likely be imprisoned during that period.

Hodges' order requires the actor to "surrender himself" upon receiving notice from the U.S. Marshal Service or the Bureau of Prisons, though details of when Snipes must turn himself in were not given.
Posted by Robalini at Friday, November 26, 2010