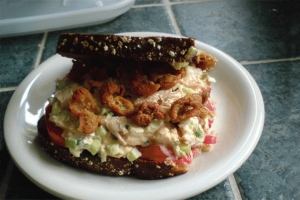 Friday, Nov 5, 2010
The best part of fried chicken without making fried chicken
Don't throw out the skin from your chicken. Turn it into crisp, airy cracklins! Chickarrones for everyone!
Francis Lam
Chicken salad is good, but chicken salad topped with fried chicken skins is the bomb

My ladyfriend is mostly a vegetarian -- but, I one day found, with a don't-ask-don't-tell policy on meat stock. Excited by the news, I ran to the store for chicken bones, only to find a whole bird that was almost the same price. I wasn't happy to buy into the system that would render such an economic improbability true, but, in a misguided reading of vegetarianism, I bought it anyway. I mean, the cheap chicken was probably an industrially made android, and barely a real animal in the first place. (I'M JOKING, PEOPLE.)

I separated the poor thing from its skeleton and started cooking the bones in water with some vegetables. After a little while, with visions of chicken salad dancing in my head, I skinned and defatted the meat to poach it in the stock. (Which, incidentally, also makes the stock richer. Win-win.)

If so, I hope you did what I did: fried it all up into chicken cracklins, the noblest form of chicken byproduct. Crunchy and airy and rich and salty, a few of them can send a chicken salad sandwich to a higher plane or make a perversely delicious topping for, well, anything. You know how it's food-dork cool to sneak bacon into everything? Imagine how totally cool you would be sneaking the best part of fried chicken into everything.

Chicken cracklins aka chickarrones* aka the Path to Avian Enlightenment

•Chicken skins and fat, from parts or a whole bird
•Salt, to taste
•Vegetable oil, as needed (you probably won't need much, if any at all)

1.Mince up all the pure yellow chicken fat you can find -- there's usually a nice big chunk on the tail.

2.Throw it with a few tablespoons of water into a heavy-bottomed pot over high heat to get it going. When it comes up to a boil, turn it down and keep the heat low to let everything render slowly.

3.Cut the skin into something like half-inch strips and dump them into the pot, seasoning lightly with salt. Not much will happen for a bit. The skin will turn gray. Gross.

5.When the strips of skin start to get sticky, they'll want to clump up and it's time to get nosy. Keep stirring every minute or two so they don't permanently stick together. Be merciless in breaking them apart -- if all that skin was meant to be in one piece, the chicken would've found a way to stay alive.

6.Around this time, you'll start to see foam coming to the surface and some real color developing as the skin gives up its water and begins to crisp.

7.Eventually, you'll notice that the skin doesn't mind coming back apart when you give it a stir. It'll start making a beautiful, delicate, sandpapery sound. That's the sound of cracklins. Keep it going for a while yet; there's still a lot of water inside the skin that needs to come out. Taste one every once in a while until they're crisp, not chewy. (At this point, you can turn the heat up if you're impatient, but be careful to not burn them.)

8.When they're crisp and light all the way through, drain them on paper towels and season with another sprinkle of salt, if need be. Try not to eat them all right then. Or go ahead.

Note: Strain the fat through a very fine strainer or cheesecloth and save it in the fridge. Cook things in it without telling anyone and wait for people to ask you why your food tastes so good. It's up to you to tell them the truth.

Francis Lam is a Senior Writer at Salon. Email him at flam@salon.com, and follow him on Twitter: @francis_lam
Posted by Robalini at Tuesday, November 16, 2010