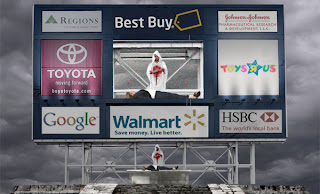 WILMINGTON, DE — The nation looked on in reverence Friday as 20,000 citizens were decapitated, dismembered, and burned alive in the name of Corporate America, continuing the age-old annual rite to ensure bounteous profits in the coming fiscal year.

"Corporate America has always provided us with plenty," said High Priest James N. Cahill, who opened the ceremony by plunging the horn of a bull into a fair-haired child's abdomen and using the freshly spilled blood to write the current value of the Dow Jones Industrial Average upon sacred parchment. "JPMorgan Chase, General Electric, and all in the great pantheon of publicly traded entities will continue to watch over us so long as we appease them each year with human lives."

"The prophecies are clear," Cahill continued. "As we utter the hallowed incantations and make our humble sacrifices of flesh, so shall the shelves of retailers overflow with the most desirable consumer products."

The blood offering follows last week's Feast of Increasing Market Values, a yearly celebration during which Americans gather with their families under the second Q4 full moon to give thanks to corporations and to pray for cash dividends during the holiday shopping season.

The grand foyer of one of the nation's great corporate overlords, to whom tribute was bountifully paid this week.

In accordance with tradition, Friday's ritual—hosted this year by the Greater Wilmington Convention Center—included stonings in honor of Monsanto, the drowning of elders on behalf of Ford, and live flayings in the name of Whole Foods.

"A joyful noise filled the hall as the priest pulled the first virgin's heart from her chest and recited the ancient, mystical section 102(a)(3) of the Delaware General Corporation Law," said 44-year-old disciple David Infantes, recalling the blasts from plastic horns donated by Wells Fargo that accompanied a young girl's lifeless body rolling down the altar steps. "In that moment, I pledged my soul anew to our blessed Corporate Overlords, increasing profits be upon them."

By many accounts, the highlight of the evening took place when the 500 Shareholder Guardians, wearing robes adorned with logos of the nation's top-ranked businesses and chanting optimistic revenue projections, used their companies' balance sheets to ignite the alcohol-soaked vestments of the "cursèd and damnable" children born the day Lehman Brothers collapsed.

"To quick profits on high-risk, short-term investments of other people's money!" the assembled masses shouted in unison. "Quick and easy profits for all eternity!"

The ceremony drew to a close as the High Priest bathed in the accumulated blood on the altar and cleansed himself in the Font of Gross Receipts, symbolically rinsing the corporate world of undesirable red ink and granting it immunity from disclosure of negative earnings.

Though the ceremony's origins are shrouded in mystery, most scholars agree on its historical success, noting that the yearly killings have coincided with an exponential growth in corporate earnings over the past two centuries. Recently, however, some high-profile academics have suggested the practice is flawed, citing the recent economic malaise as evidence.

"We're stuck in the Dark Ages if we still believe some elaborately choreographed, archaic ritual has any impact on today's dynamic multinational corporations," New York University professor Nouriel Roubini said on CNBC this week. "If we really want Corporate America to restore our prosperity, then we have to own up to the facts, face reality, and kill every last one of our firstborn sons with our own bare hands."

"It was a great honor for my daughter to be chosen by a company as esteemed as Best Buy," said ceremony attendee Mark Granaldi, who, as a family member of one of the sacrificed, received a complimentary gift bag that included Crest whitening strips, a $25 Hess gas card, Old Navy board shorts, and a tote bag bearing the trademark of Merck. "Just as the flames rose from her body toward heaven, so too shall Best Buy's stock price climb ever higher."

At press time, Corporate America had conferred upon its devout followers the blessings of several new Doritos flavors and a sacred promise to release a deluxe unrated edition of Salt, starring Angelina Jolie, on Blu-ray.
Posted by Robalini at Monday, December 06, 2010