The Adventures of Celeste the Cat 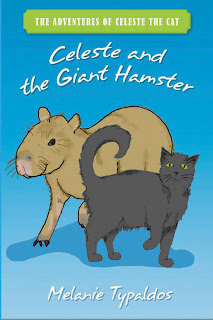 Kool Kid's Book of the Week
From Amazon.com: 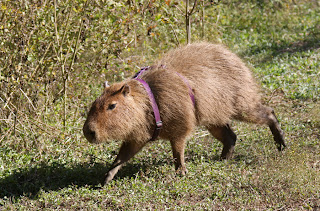 The Adventures of Celeste the Cat: Celeste and the Giant Hamster
Melanie Typaldos

Celeste the Cat is tormented by her human’s insistence on keeping a dwarf hamster, appallingly named Celestina, as a pet. Enlisting the aid of two friends, the brave but intellectually challenged Tiger and overly-enthusiastic Ruby, she sets out to trap a giant hamster that is loose and living in a nearby field. She plans on placing the giant hamster in front of Celestina’s cage to show her owner what she thinks of pet rodents. The giant hamster--actually a capybara--proves to be a larger, stronger and more intelligent adversary than the cats expect, resulting in a series of humorous mishaps that leave the trio battered but not dispirited. Slowly the cats come to realize that the capybara is not the frightening monster they imagined. When the capybara has a litter of eight precocious capy-kittens, Celeste, Ruby and Tiger find themselves doing things they never imagined, like going for a swim and protecting baby rodents from a tough gang of tom cats. 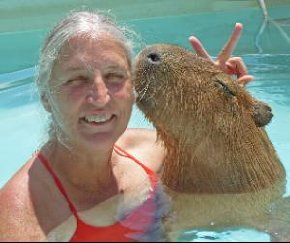 When Melanie Typaldos took a vacation in Venezuela in February of 2002, she never dreamed of how much it would change her life. The trip to Hato El Frio in the Los Llanos region was her first close encounter with a capybara, the largest (and cutest) of all rodents. Six months later, Melanie adopted her pet capybara, Caplin Rous, and within a year she had written her middle grade novel, Celeste and the Giant Hamster.

Please visit http://www.gianthamster.com/ for more information on Caplin Rous and capybaras in general.
Posted by Robalini at Thursday, December 02, 2010

Email ThisBlogThis!Share to TwitterShare to FacebookShare to Pinterest
Labels: Capybara