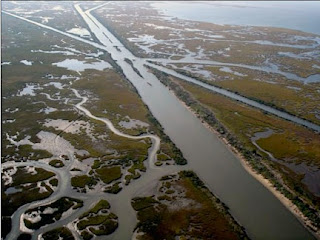 This site is a review of some empirical evidence that will forever change the history of pre-diluvial America, shifting our paradigm from what we think we know about America to a whole new standard of 'Truth' about pre-historic civilizations on the North American continent.

Ancient Cities on our Coasts

There are hundreds of miles of coastline, from Maine to Florida, continuing across the Gulf States including Texas and parts of Mexico, that are covered with vestiges and remnants of a very sophisticated, enormously large water borne culture or civilization that existed BEFORE current sea level rose an average of 12 to 25 feet, or more.

Sophisticated Geo Engineers: The evidence you are about to see, shows nearly every swampy piece of marsh land on most of the Eastern US Coast and Gulf of Mexico, to have been 'worked' and 'inhabited' by a very large, very sophisticated population of canal builders during some remote pre-flood period.

Age of the Complexes

These complexes were built BEFORE the water table rose to its present level. Some of the structures run down to depths of 12-25 feet BELOW current sea level. We will use 15' as an average. The chart to the right, from Globalwarmingart.com, shows a 5 meter rise in the last 8,000 to 10,000 years.

That's an approximate rise of 16 feet since about 7,500 BCE. It appears these complexes existed a very long time ago.

Please note, you MUST have Google Earth, or a Google Earth 'Plug In' to view these images.
Posted by Robalini at Monday, December 06, 2010

Email ThisBlogThis!Share to TwitterShare to FacebookShare to Pinterest
Labels: Mexico