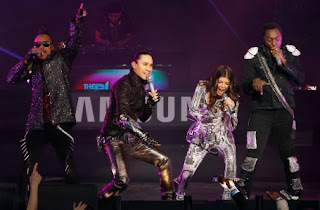 Rumors that they know how to run routes couldn't be confirmed. The announcement was about the group playing the halftime show, not the actual game.

But still, this remains somewhat of a big deal as the Black Eyed Peas will be the first non-classic rock act to perform since Justin Timberlake and Janet Jackson took to the stage in 2004. Well, at least that passed without incident.

"They could have picked anybody," will.i.am told Rolling Stone. "They could rock a million and get Cheap Trick...But it says something that they picked us." Will.i.am goes on to say that, "I've been at every single one of them since that. The Prince one, the Paul McCartney one, Tom Petty and Bruce Springsteen." (he must simply have neglected the Who one, the Rolling Stones one and the U2 one.)

The Grammy award-winning group formed 15 years ago and have sold more than 28 million albums and nearly 31 million digital tracks. By happy coincidence, their new album, The Beginning, drops on Tuesday. The Super Bowl takes place on Feb. 6 at Cowboys Stadium in Dallas. And pretty much the only prediction NewsFeed is willing to make right now is that the Cowboys won't be playing.
Posted by Robalini at Thursday, December 02, 2010