JFK: The Assassination of Democracy 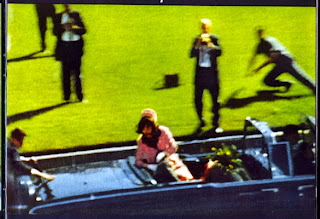 The Kennedy assassination and the conspiracies surrounding it are imbued with such meaning for Americans because the distortion radiating in waves almost immediately following the spectacle was the aftershock of a system convulsing in its own death.

I do not use the “death” metaphor in regards to the JFK assassination lightly, for death is no light matter. Follow me through the looking glass.

Oliver Stone taught an entire generation to invoke Cicero’s Senate speech when thinking about any event and the official version of such events, through the voice of the character X (based on Fletcher Prouty) in the movie “JFK.” He taught people that the “how and the who” is all scenery for the public, and the real questions are: why?, who benefits?, and who has the power to cover it up? ”Cui bono?” The greatest thing the filmmaker ever did was to question the motives of the men to whom Americans willingly relinquish power.

And why not? The default position should not be absolute trust in our elected officials and military leaders but absolute skepticism. Why? Quite simply, power is at stake, and nothing drives men to cross into the realm of death quite like power and money–the true religion for many human beings.

But, what of JFK’s death itself: the actual moment? It is pure spectacle.

Caught on film, burnt into a strip of chemicals and duplicated for all time, it became something else as soon as the Zapruder film was made public. It outdid Hollywood at its own game and made the moment into a collective mesmerization. The frame doesn’t show who did it, and if the official story that Oswald was not the lone assassin isn’t believed, then we — as voyeurs, amateur sleuths — extend ourselves by way of imagination beyond the borders of the frame, where reality is nebulous.

The shock of Kennedy’s head being disintegrated has the appearance of a spectacular special effect. But, as with any image of death, whether painted, frozen in photographic stillness or under the magical spell of persistence of motion, a desensitization occurs. The shock of the instant dissipates — or does it?

No, the shock is transferred into something else entirely but related by virtue of the moment’s symbolism. The shock no longer has its effect in a repulsion at a life being taken, but in the death of something much larger. The sick feeling permeating the collective American stomach is the collective witnessing of nothing less than the death of democracy.

Kennedy was a complex figure, at once part of the system but apart from it. In a sense, he’d always been an outsider owing to his Irish Catholic heritage — trying to, perhaps because of his father, infiltrate an order that was entrenched and as exclusive as a fraternity. The high class social equivalent of “separate but equal.” His loyalties were to family and country.

Neither he nor his brother Robert were willing to prostrate themselves to the traditional power structures, only use and manipulate them by turning the order’s own weapons — realpolitick and machiavellian maneuvering — against them. RFK probably superceded his brother in sheer disgust of the established order, though he was not possessed of the same political finesse, which made him even more dangerous.

As French philosopher Jean Baudrillard noted in his book “Simulacra and Simulation”:

“The Kennedys were killed because they incarnated something: the political, political substance, whereas the new presidents are nothing but caricatures and fake film — curiously, Johnson, Nixon, Ford, all have this simiam mug, the monkeys of power.”

And after? After JFK’s assassination, a slippage occurred, in which our sense of democratic reality was lost in a hall of mirrors — the illusion of democracy. We operated under the assumption that it was still functional, if it ever had been in the first place.

With Kennedy, it was as if someone materialized who would attempt to change the established order, even if the legislature and the courts were unwilling to follow. A figure that posed a perfect threat to that order because he would expose it for what it really was: an oligarchy, an aristocracy not of nobility but of money and influence.

He was Machiavelli’s Prince inverted: come not to accumulate power and decapitate the aristocracy for personal gain, but to feed the power back to the source whence it emanates — the people.

This made Kennedy supremely dangerous. It is hard to imagine how dangerous he truly was because very few people stop to think about the forces arrayed against him in the guise of other politicians, defense contractors, corporations, banks, etc.

It almost doesn’t matter who assassinated JFK–only that it happened. The assassin is, as Stone suggests, pure scenery. It is a magic show by a cadre of illusionists. Even the more meaningful questions of why, who benefits and who has the power to cover it up lose all meaning as you pass through the looking glass.

We lose ourselves in the minutiae: the static of the spectacle is now transferred into theories in which we are hopelessly lost. And this is exactly where we are meant to be — lost in the static. The spectacle of JFK’s assassination, and our obsession with the spectacle and its surface-level detail, is simply the microcosm of our life inside what passes for American democracy now.

Did the CIA kill Kennedy? The Mafia? The Russians? The Cubans? Oswald? E. Howard Hunt? The French Connection? Defense contractors? Wall Street? It is all of them and none simultaneously. Whoever it was, the effect is the same, and this is the critical point. It is the most shocking aspect of the spectacle. It not only brought death to Kennedy, but death to everything he symbolized.

Oswald acting alone achieves the same effect as that of every possible conspiracy theory scenario: power re-established, preserved temporarily. And it is repeated with Robert Kennedy — equally unreal in its imagery.

There was an effort to resurrect the two Kennedy’s in the figure of Barack Obama, but that was false hope. If he had half the will, or posed half the threat of the Kennedy’s, the spectacle would have been repeated again.

Remember: it does not matter how it happened, or even why (we know the answer), only that it happened.

Imagine that you are JFK, freshly-elected President. You are brought into a room (it doesn’t matter where). Men in suits approach you and sit down. And you, as Kennedy, see those disturbing smiles on their faces, and no words pass between you aside from some pleasantries. Now it is time for business. There is no politics to this interaction. One of these men lays it out in full detail: keep the house in order and all will be well. Transgress the order and, well, you can imagine the endpoint.

Now imagine this interaction repeated with the newly-elected President Obama. Now you are him. The men with similar vacant grins, but they have the spectacle of the Zapruder film as ammunition and ask you how it will be? And you know then you will not transgress the order because you know very well the endpoint.

Here’s a quote from Baudrillard’s “Simulacra and Simulation”:

“In the end, the game of power becomes nothing but the critical obsession with power–obsession with its death, obsession with its survival, which increases as it disappears. When it has totally disappeared, we will logically be under the total hallucination of power — a haunting memory that is already in evidence everywhere, expressing at once the compulsion to get rid of it (no one wants it anymore, everyone unloads it on everyone else) and the panicked nostalgia over its loss. The melancholy of societies without power: this has already stirred up fascism, that overdose of a strong referential in a society that cannot terminate its mourning.”

It is that power which benefitted from Kennedy’s death: a power terrified of seeing its raison d’être disappear.

They may have assassinated democracy through the symbol of Kennedy, but they have not terminated the will of those able to see the machinery behind the illusion.
Posted by Robalini at Wednesday, December 01, 2010