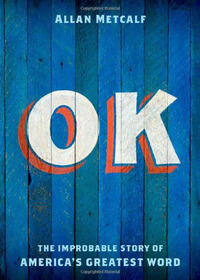 OK, it's quiz time: You probably say it dozens of times every day. It may be the most widely used expression in the world. And yet it's so simple.

OK, ready for the answer?

Allan Metcalf is so enthralled by those two letters that he's written an entire book about them: OK: The Improbable Story of America's Greatest Word.

Metcalf tells NPR's Guy Raz that he sifted through a handful of conflicting stories and discovered the birthplace of "OK" — a 19th century Boston newsroom.

It started one day in 1839, when a few newspaper editors were joking around.

"They had a lot of abbreviations that they were using and made up on the spot and thought they were terrifically funny," Metcalf says. "And OK was an abbreviation for 'All Correct.' "

Now most of those jokey abbreviations faded blissfully into history. But OK's star was rising — thanks in part to President Martin Van Buren's re-election campaign in 1840.

The mutton-chopped incumbent hailed from the town of Kinderhook, N.Y.

"He got the nickname Old Kinderhook, and early in 1840, OK clubs sprung up with the slogan, 'OK is OK.' So taking that funny little word and making it a mainstay of the political conversation in 1840, suddenly OK was way OK," the author says.

Unfortunately for Van Buren, though, the election didn't turn out OK — he got drubbed by William Henry Harrison.

The man Van Buren succeeded as president, Andrew Jackson, even got roped into the "OK" story — because of a campaign dirty trick, Metcalf says.

"One of Martin Van Buren's opponents who also opposed Jackson because they both were Democrats, claimed that Andrew Jackson had been a terrible speller, and so he would get a document and when he approved it he would write O period K period on it indicating that it was all correct."

Even though the story wasn't true — Metcalf says Jackson was actually quite a good speller — it stuck. And within the next two decades someone else began writing OK on documents as a sign of approval.

Soon, OK was being used for the telegraph, like an early form of the LOLs and OMGs we send in text messages today.

In the 19th century OK was popular, but top authors like Mark Twain and Bret Harte avoided using the word in their works.

"Louisa May Alcott used OK once in Little Women, and in the next edition of that she changed OK to 'cozy' ... like 'I'm cozy with that,' instead of 'I'm OK with that' — which indicates there was something uncomfortable about it."

And the word continued to struggle for elite acceptance — until Woodrow Wilson, the only president to earn a Ph.D., gave his stamp of approval.

"He thought it had really come from a Choctaw Indian word, which he spelled 'okeh,' which was their equivalent of something like OK," Metcalf says.

The American Philosophy Of OK

One reason OK is so important, Metcalf argues, is because it embodies America's can-do philosophy in just two letters.

"If something's OK, that's OK, it'll work, maybe it's not perfect but it'll work, and that's an American attitude."

He points out that the word is also about acceptance. Just look at the best-selling self-help book from the 1960s, I'm OK, You're OK, by Thomas Harris.

"Based on that I'm OK, you can be different from me and that's OK, I think our country is a lot more tolerant now than it used to be."

Metcalf says OK may be the most important American word, and we should celebrate it.

"I'm creating 'OK Day,' and the nice thing is on OK Day I'd like everyone to go around saying OK, and I'm sure that they will because they say OK every day."

Mark it down on your calendars: March 23, 2011, will be the first-ever OK Day — 162 years to the day since those two little letters were printed together in the Boston Morning Post.

The ABCs of OK

It is said to be the most frequently spoken (or typed) word on the planet, bigger even than an infant's ?rst word ma or the ubiquitous Coke. And it was the ?rst word spoken on the moon.

It's America's answer to Shakespeare.

It's an entire philosophy expressed in two letters.

Yes, OK. Just two simple letters. And two letters of humble origin; they were born as a lame joke perpetrated by a newspaper editor in 1839. But these two simple letters (or four, if you use its genteel alter ego okay) anchor our agreements, con?rm our under­standings, and choreograph the dance of everyday life.

This is a book about OK. And OK truly deserves a book of its own, not only because it is di?erent from anything else in our language but because it is so important. OK is a meme that has burrowed deeply into the way we think and act. In fact, those two letters encapsulate a whole view of life — the American philoso­phy, if two letters can be said to embody a philosophy, and if Americans can be said to have one.

Yet we scarcely notice. OK seems too simple, too trivial, and above all too familiar to attract notice to itself. It scarcely makes an appearance in books of famous quotations. Here, in fact, is the complete Book of Famous OK Quotations:

Wait a minute, you might say. What about Todd Beamer's famous "OK, let's roll!" to begin the attack on the terrorists who hijacked United Flight 93 on September 11, 2001? The full quotation was "Are you guys ready? OK, let's roll!" But even in that statement, the OK was inconspicuous. On the T-shirts and other memorabilia that soon were produced in his honor, only the last two words were reproduced. His wife Lisa's book honoring him likewise omitted OK from its title: Let's Roll! Ordinary People, Extraordinary Courage. As Time magazine summarized in December 2001, "Many diverse Americans have latched onto his phrase 'Let's roll' to symbolize that strength of character." But not OK.

It's everywhere, but hardly noticed. In the November 23, 2009, issue of the New Yorker you will ?nd a cartoon whose caption begins and ends with OK. Two waiters are standing in an entrance-way looking at a woman at a distant table, and one says to the other, "O.K., her mouth is full — run over and ask her if every­thing is O.K." Amusing, but not because of OK. And there's no indication that the joke was making any kind of play on the two di?erent meanings of OK that it employs.

Another missed opportunity for a famous OK quotation came when Frank Silver and Irving Cohn wrote one of the best-known songs of the twentieth century. In an alternate universe, maybe, their lyrics would go like this:

There's a fruit store on our street. It's run by a Greek. And he keeps good things to eat, But you should hear him speak. When you ask him anything, Never answers no. He just OKs you to death, And as he take your dough, he tells you: "OK! We have no bananas. We have no bananas today. . . ."

But in our universe, because of the unassuming nature of OK, Silver and Cohn instead chose a di?erent word for their 1923 hit, and the quotation books have only "Yes! We have no bananas." Important, yet inconspicuous. That is just one of the oddities of the world's best-known word.

This book will explore the mystery of OK: its odd origin, its unlikely survival, its varied forms and meanings, and its pervasive in?uence. OK is the most amazing invention in the history of American English.

It would not be much of an exaggeration to say that the modern world runs on OK (or plain lowercase k, if you are texting). We write those letters on documents to mark our approval. We speak them to express assent, or just to say we're listening. We accept a computer's actions by clicking on OK. And we also use OK to introduce matters of importance, or recall an audience's wander­ing attention.

Those are the simple obvious uses for OK, the ones we know well. In those situations, what a good friend OK is! A handy tool. An uncomplaining workhorse. Indeed, in America in the twenty-?rst century, it's hard to get through a conversation without a plenti­ful sprinkling of OK. It's the easiest way to signal agreement, whether with a written OK on a document or an OK spoken aloud:

At the start of a sentence, OK can also be a wakeup call, an alert, an attention getter, an announcement that something new is coming:

OK, I'll only say this once.

To begin to grasp the full import of the phenomenon that is OK, we need to step back and consider it from fresh perspectives. When we do, we ?nd that OK is like blue jeans, Shakespeare, and light.

OK is as American as jeans. In fact, it's very much like them. Nearly everyone uses both OK and jeans for everyday purposes, but not on formal occasions. And they are both American inven­tions of the nineteenth century that have spread to the far corners of the globe.

Less obviously, OK is also America's answer to Shakespeare. Or more precisely, OK is America's Shakespeare, a two-letter expres­sion as potent (though perhaps not as poetic) as anything in the Bard's works. Like Shakespeare, OK is protean, pervasive, in?uen­tial, and successful in its own day and in ours. But the similarity goes deeper.

Like Shakespeare, OK had humble origins. This has set some critics on edge, prompting them to deny the attested origins in favor of more digni?ed ones.

For Shakespeare, the anti-Stratfordians reason that the "poacher from Stratford," a commoner, could not have written the noble language of Shakespeare's plays and poems. No, those works of genius must have come from a nobleman like the Earl of Oxford, a scholar like Francis Bacon, a college-educated playwright like Christopher Marlowe (whose death in 1593 must have been faked), or royalty—maybe Queen Elizabeth.

Similarly, for OK, elitists ?nd it beyond embarrassing to think that OK began as a joke misspelling for "all correct." Surely, they reason, an expression as serious and important as OK must have come from a more serious abbreviation, like "Old Kinderhook" for presidential candidate Martin Van Buren in the 1840 election. Or maybe it came from baker Otto Kimmel's supposed custom of imprinting his initials in vanilla cookies. Or wait—maybe it was borrowed from another language, like Choctaw, Scottish, Greek, or Mandingo.

Another thing OK and Shakespeare have in common is elu­siveness. How do you properly spell OK? And is it a noun, verb, adjective, adverb, or interjection? Indeed, is it a word at all, an abbreviation, or something else? There are no simple answers to these questions.

Similarly, the text of Shakespeare's plays can't be pinned down. The quarto and folio versions of the plays published during or shortly after Shakespeare's lifetime have signi?cant di?erences, and it is hard to imagine the full text of either quarto or folio being spoken quickly enough to ?t the "two hours tra?c" stated in the prologue to Romeo and Juliet.

And light! Yes, OK is like light, in our post-Einsteinian under­standing of that pervasive phenomenon. Before Einstein, physi­cists were puzzled: light sometimes appears to be a particle, sometimes a wave. Is light a wave or particle? Einstein's answer was "Yes, it's either, or both." That's the answer we have to give to the OK phenomenon. Is it a word or an abbreviation? Is it noun, verb, adjective, adverb, interjection, or all of the above? The answer has to be "Yes, it's either, or both, or all."

It's an old-fashioned joke with a postmodern punch line.

So it will take a village of chapters to approach the heart of the mystery of OK.

Email ThisBlogThis!Share to TwitterShare to FacebookShare to Pinterest
Labels: OK