This is why you shouldn’t play football at Wrigley Field 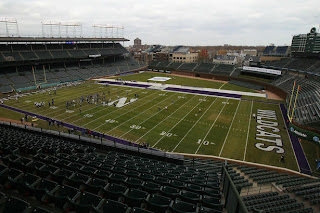 This is why you shouldn’t play football at Wrigley Field
Fri Nov 19 2010
The discovery Friday that the dimensions of baseball shrine Wrigley Field in Chicago do no accommodate football: One of the end zones abuts a brick wall.
Cathal Kelly

After 18 months of planning, NCAA officials have realized that baseball shrine Wrigley Field is dangerously unsuited for football.

Unfortunately, they made the realization one day before a big football game is played there.

On Saturday, Northwestern and Illinois will play at Wrigley in front of a sold-out crowd. The lucky fans are seated in the western end zone.

That’s because the back of the eastward end zone abuts a brick wall in right field. The goalposts there have been mounted on the wall. One long touchdown pass and someone is going to get seriously pancaked.

So Friday morning, the NCAA passed a set of temporary rules that make football a half-court game.

All offensive plays will now head toward the relatively wide-open expanses of the west end zone. Each time possession changes, the ball will have to be re-placed to accommodate the change.

In an effort not to totally alienate half the crowd, all kickoffs will head into the east end zone.

It’s worth noting that the Chicago Bears played at Wrigley for half a century. It was just as dangerous then — one of the end zones fell off into a dugout. But they valued human life less in those days.
Posted by Robalini at Wednesday, December 01, 2010