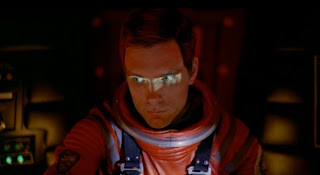 As some of you have observed from time to time, this column has tended thus far to avoid the most notable scenes in cinema history—those iconic, oft-excerpted moments that even folks who haven’t seen the movie in question generally know well. For one thing, like most critics, I’m always eager to pimp lesser-known favorites, and it’s hard to imagine a better opportunity for persuasion than sitting readers down with a representative hunk of awesomeness. More than that, though, I’ve been concerned that there wouldn’t be a whole lot to say about scenes so familiar that most of you could play them in your head from memory. Is there any point to close analysis of something everybody’s seen a dozen times or more? Still, I continually find that even sequences I thought I knew backward hold some surprises when carefully examined, so I walked over to my DVD collection and grabbed the first all-time masterpiece I saw, which happened to be Stanley Kubrick’s 2001: A Space Odyssey. Its most iconic moment? Surely Keir Dullea demanding that Hal open the pod bay doors. So I watched it again. So should you.

Quick context for the handful of folks who don’t know precisely what’s going on here: HAL 9000, the ship’s computer—which demonstrates a level of artificial intelligence well beyond anything we’re likely to see for decades to come, much less the state of the art from nine years ago—has gone quietly bonkers, for reasons never made explicit in the movie. (Arthur C. Clarke lays it all out in the novel, written concurrently with the screenplay. A mistake, in my opinion.) Having already killed four of the five crew members, three of whom were in hibernation, he’s now denying re-entry to the ship’s last surviving human, Dullea, who went out in an auxiliary pod to retrieve his colleague’s body. HAL isn’t lying, incidentally—he did “hear” (via lip-reading) Dullea and the colleague planning to disconnect him and take manual control of the spacecraft. So it’s fair to interpret HAL’s behavior as an act of self-preservation.

Now what exactly has burned this particular scene into our collective cultural memory? It isn’t just the admittedly arresting notion of a crazy murderous computer, or we’d be seeing clips from 1977’s Demon Seed on TV every few months. (If you happen to see Demon Seed as an impressionable child, however, it’ll stay with you for the rest of your life. Trust me on this.) No, what makes this standoff so chilling is the maddeningly soothing tone of Douglas Rain as the voice of HAL. “I won’t argue with you any more,” Dullea snaps at one point, but the statement is redundant—there’s no arguing with an entity that’s so conversationally implacable. What’s more, HAL sounds exactly the same in this scene as he does in previous scenes in which he and the crew engage in meaningless chitchat. There’s no indication whatsoever, tonally, that by refusing to open the doors, he’s effectively pronouncing a death sentence, and when he decides there’s no further point in communication, he simply says “goodbye” and does the equivalent of hanging up on Dullea, without even the tiny satisfaction of an audible click.

However, that description contradicts one of the most common observations about 2001, which is that HAL seems more human than any of the human characters. I’ve always thought so myself, in fact, but had never really pondered why before. Prior to rewatching the film, which I hadn’t seen since the mid-’90s, I think I would have largely attributed this effect to the relative (and very likely deliberate, on Kubrick’s part) weakness of the film’s onscreen cast; if you look up reviews, you’ll find that Dullea and Gary Lockwood are frequently described with adjectives like “flat” and “wooden.” And it’s true that nobody’s ever gonna mistake them for James Cagney and Humphrey Bogart, charisma-wise. But even in this brief scene, Dullea gives a totally credible performance—his frustration and mounting concern are evident in his facial expression and in the way his throat constricts as he realizes the gravity of his predicament. Meanwhile, HAL remains, well, robotic, in the sense that there’s no variability (at this point, anyway) in his carefully measured responses.

So I watched the scene again, a couple more times, trying to work out where this overwhelming impression was coming from, and it finally hit me. It’s the silence. Not the silence after HAL “hangs up,” but the initial silence, before he first responds. What makes the human beings in 2001 seem a bit less than fully human isn’t just the nature of the performances—it’s that every interaction among them is completely functional. We’re seeing people say and do whatever is required to achieve their objective at that particular moment, and nothing more. HAL, by contrast, demonstrates what we all recognize as neurosis. And while it’s mostly implied by his behavior, it does have one explicit manifestation: that refusal to answer Dullea’s summons for 43 seconds, followed by capitulation when it becomes clear that Dullea isn’t gonna shut up. That’s so human, it almost hurts. We’ve all been there, most likely on both sides. In fact, if a computer ever manages to pass the Turing test, it’ll surely be by replicating this sort of semi-rational evasion, rather than by saying something expressly intelligent or creative. It’s hard to conceive of a machine thinking “I don’t even want to deal with you right now. Oh, all right.”

Of course, when I say “silence,” I only mean that HAL isn’t yet speaking. Kubrick and his sound editor, Winston Ryder, achieve a magnificent atmosphere of unearthly estrangement in the sequence of shots that accompanies Dullea’s repeated efforts to get HAL’s attention, cutting from the ambient hum of the ship (which changes slightly in different areas) to the vague static and subtle whirring heard inside Dullea’s pod to the complete aural void of space, with each wall of sound, or lack thereof, punctuated by increasingly urgent cries of “Do you read me?” More than the groundbreaking special effects involving apparent weightlessness, or the previously unimagined depictions of the cosmos, it’s Kubrick’s clinical precision, perhaps best realized in this eerie montage, that inspires a sense of awe in me whenever I watch this movie. Which is true even though the phrase “clinical precision” sort of connotes “anti-human.” 2001 isn’t warm and fuzzy. But neither is infinity, and no movie has taken a greater swing at the infinite. And yet in the end, it’s still that placid twinge of irrationality that lingers most of all.