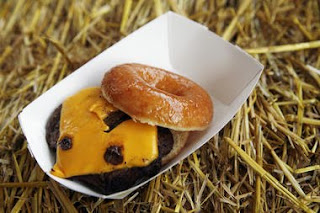 The Krispy Kreme cheeseburger – that's right, a cheeseburger between doughnut halves – reportedly got its start when a chef in Decatur, Ga., came up with the idea. The chef, Chandler Goff, named it the Luther Burger.

Then in 2006, an independent baseball team, the Gateway Grizzlies, began selling its own version at their baseball park in Sauget, Ill.

That's when the doughnut/burger combination began to attract all kinds of attention. Sports Illustrated, ESPN, CNN, and others reported on the Grizzlies' burger. Paula Deen, of TV cooking fame, added an egg to the Luther Burger and loved it.

Admittedly, the Krispy Kreme Cheeseburger (KKC) sounds atrocious to just about everyone who hasn't tried one. The doughnut is halved, then its cut sides are grilled and become the outside of the sandwich so that the sugary glaze makes mortal contact with the cheese and the meat.

Even if that sounds good, there are all kinds of objections from the eat-healthy crowd.

Nevertheless, the sweet 'n salty combination seems to be attracting a growing number of fans.

The Machine Shed, a restaurant with a food concession at the Wisconsin State Fair, told the Milwaukee Journal it expected to sell about 3,500 Krispy Kreme cheeseburgers over the first three days of the fair. About a quarter of its customers were pitching in an extra buck for the side order of chocolate-covered bacon.

So it seems only a matter of time before restaurants begin to pick up on the idea.

According to the blog, Crave Shack in nearby Astoria, N.Y., offers its own version: the Crave Doughnut Burger.

Late last year, some news reports suggested that the Wendy's fast-food chain might be interested in buying Krispy Kreme, which could have made the KKC a quick national phenomenon. But no deal materialized.

Fans of healthful eating can breathe a sigh of relief – for the moment.
Posted by Robalini at Saturday, August 21, 2010