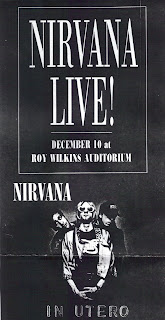 (Editor's Note: I recently found this polemic I wrote in the early 90's for Cake Magazine in Mpls. Enjoy!)

I'm compelled to convey some qualms concerning the so called "Grunge" movement which CAKE touts in an ironically impartial yet sarcastic "feel good" way. Why is an appallingly ineffectual movement (a movement which makes a deliberate point of going nowhere), one that glorifies vapidity and decay, so thoughtlessly embraced by the twenty nothing generation? Why does the Grunge generation make a point of writing itself off as a loss, even before it has learned to read? Since I probably won't get any answers, I'll pursue an intuitive lead to gather some possible clues to uncover the origins of this distressing socio-phenomenon. First off, where exactly does the Grunge substance itself come from? Do wannabe Grungers stealth off to the suburbs after the bar closes and siphon Yuppie cesspools and lavishly apply the fetid grease paint in some secret com-postmodern ritual? Or is the moldy manna simply scooped up out of the gutters near shopping malls? The dirt has got to come from somewhere and I doubt if it is the result of hard work, commitment to political change and a desire to alleviate the suffering of others. Now if, by chance, you happen to be clutching on to some Grunge, open your hand and spy what you got that you think is so precious and so different! Chances are its good 'ol fashioned Capitalist Dreck that's slithering in tarry, malignant strands through your fingers. Well now, ask yourself, Grunger and Grungette, if that loam you've bought has any fertilizing potential. I mean, can anything bloom out of your make-up that will make any lasting difference? Hardly! Because Grunge expects to rebel without the responsibility of rebellion which leads only to a blind conformism of the worst kind. In your fashionable passivity, you're doing exactly what the powers that be want you to do, i.e., look like a Special Ex drinker and do nothing. Grunge is the equivalent of sneaking up into baby boomers' attics and trying on musty hippy clothes. It's all nice and make believe up there in the dusty confines, but face it, it doesn't amount to shit when you come down the stairs in your costume and hit the streets. Get a clue Grunge monkeys! How about some Scour Power? Cuz I'd sure like to see what's underneath the dirt you're touting as the new ''Wow." An occasional bright mind? An imagination unscathed by MTV and Ecstasy? A bona fide world view and dedication to changing the conditions on this planet? Perhaps someone I can have a conversation beyond two exchanges before their fragile attention spandex snaps under the pressure of a limbic impulse signaling that it is last call for alcohol? Please help me, because I don't think I've ever encountered a trend so pathetically null in my 3.5 decades of existence.

I will right away seize your rss feed as I can not to find your
email subscription link or e-newsletter service. Do you've any? Kindly permit me understand in order that I could subscribe. Thanks.

Feel free to surf to my blog post - chloe バッグ