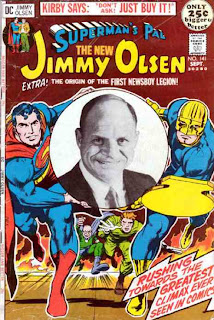 Behold what is perhaps the most perplexing comic book cover of all time. In 1971, when Jack “King” Kirby left Marvel for DC Comics, he took over the Jimmy Olsen (“Superman’s Pal”) title. It’s hard to imagine a more dull comic franchise for the co-creator of Spider-man and the Fantastic Four to be assigned, but the story was that Kirby didn’t want to take anyone’s job when he arrived at DC, so Jimmy Olsen is what he got. And then he promptly turned it inside out, as should be obvious from this preposterous cover featuring, uh… Don Rickles??? That’s right HOCKEY PUCK, Don Rickles, who in this (and one more issue) is seen fighting off his alternate world doppelganger, “Goody Rickels.”

So weird. I mean, why Don Rickles and not… like Bob Newhart or Shelly Berman???
Posted by Robalini at Saturday, August 21, 2010