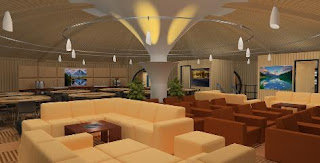 Jason Hodge, father of four children from Barstow, Calif., says he's "not paranoid" but he is concerned, and that's why he bought space in what might be labeled a doomsday shelter.

Hodge bought into the first of a proposed nationwide group of 20 fortified, underground shelters — the Vivos shelter network — that are intended to protect those inside for up to a year from catastrophes such as a nuclear attack, killer asteroids or tsunamis, according to the project's developers.

"It's an investment in life," says Hodge, a Teamsters union representative. "I want to make sure I have a place I can take me and my family if that worst-case scenario were to happen."

There are signs that underground shelters, almost-forgotten relics of the Cold War era, are making a comeback.

The Vivos network, which offers partial ownerships similar to a timeshare in underground shelter communities, is one of several ventures touting escape from a surface-level calamity.

The company sells fiberglass shelters that can accommodate 10 to 2,000 adults to live underground for one to five years with power, food, water and filtered air, McCarthy says.

The shelters range from $400,000 to a $41 million facility Radius built and installed underground that is suitable for 750 people, McCarthy says. He declined to disclose the client or location of the shelter.

The shelters have their critics. Ken Rose, a history professor at California State University-Chico and author of One Nation Underground: The Fallout Shelter in American Culture, says underground shelters were a bad idea a half-century ago and they're a bad idea now.

"A terrorist with a nuke in a suitcase pales in comparison to what the Cold War had to offer in the 1950s and '60s, which was the potential annihilation of the human race," he says.

All Hands has helped more than 100 public and private sector clients with emergency management and homeland security services, according to its website.

The types of cataclysms envisioned by some shelter manufacturers "are highly unlikely compared to what we know is going to happen," Davis says.

"We know there is going to be a major earthquake someday on the West Coast. We know a hurricane is going to hit Florida, the Gulf Coast, the East Coast," he says. "We support reasonable preparedness. We don't think it's necessary to burrow into the desert."

The Vivos network is the idea of Del Mar, Calif., developer Robert Vicino.

Vicino, who launched the Vivos project last December, says he seeks buyers willing to pay $50,000 for adults and $25,000 for children.

The company is starting with a 13,000-square-foot refurbished underground shelter formerly operated by the U.S. government at an undisclosed location near Barstow, Calif., that will have room for 134 people, he says.

Vicino puts the average cost for a shelter at $10 million.

Vivos plans for facilities as large as 100,000 square feet, says real estate broker Dan Hotes of Seattle, who over the past four years has collaborated with Vicino on a project involving partial ownership of high-priced luxury homes and is now involved with Vivos.

Catastrophe shelters today may appeal to those who seek to bring order to a world full of risk and uncertainty, says Alexander Riley, an associate professor of sociology at Bucknell University in Lewisburg, Pa.

"They're saying, 'I can control everything,' " Riley says. " 'With the right amount of rational planning, I can even survive an asteroid hitting the Earth that causes a dust cloud like the kind we believe wiped the dinosaurs out.' "

The Vivos website features a clock counting down to Dec. 21, 2012, the date when the ancient Mayan "Long Count" calendar marks the end of a 5,126-year era, at which time some people expect an unknown apocalypse.

"We're not creating the fear; the fear is already out there. We're creating a solution."

The room is very beautiful. As it is showing all the necessities in the room under one roof.

Now all is clear, I thank for the information.

I do not even know how I finished up here, but I believed this put up was
great. I do not know who you are but definitely you're going to a well-known blogger if you are not already. Cheers!