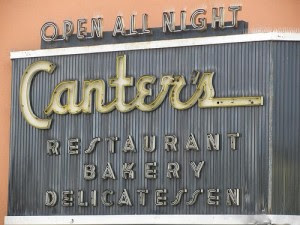 LOS ANGELES, USA – In quibbles over whether New York or LA is the best urban turf in America, two topics are bound to come up: the quality of the nightlife, and the quality of the pastrami. New York clearly edges out LA as the city that never sleeps, but even though New York immigrants birthed the Jewish deli, some argue that the pastrami argument is less clear cut, the verdict hanging in the balance like a rosy slice at the blade of a meat carver. One venue in LA makes the decision of declaring New York the hands-down winner of Deli-dom less obvious: Canter’s Deli.

Canter’s Deli is a 75-years-old-and-still-kicking bastion of cured meats and Jewish deli kitsch that is both open 24 hours and serves to-die-for pastrami on rye (4,900 lbs. of the stuff per month!). All the Yiddish favorites are well represented here, from matzo ball soup to brisket and kishka, but there’s also plenty for the non-kosher-concerned set, from salads to seafood to belt-bursting breakfasts. They’re serious about deli authenticity here: they pickle their own pickles, craft their own knishes, and whip up their own potato salad and cole slaw. Plus, immediately upon entry, you’ll be confronted with the in-house bakery, which tempts you to eat dessert first with cookies, cakes, and breads baked fresh twice daily.

Yet aside from diehard pastrami seekers, few come here just for the food. The scene, especially late night, is the considerable draw. The hasn’t-been-revamped-since-the-’50's vibe draws droves of curious tourists, post-party hipsters, and a mishmosh of celebs both young and old. The haven’t-been-retrained-since-the-’50's staff disgruntles the locals, but there are still a fair number of regular devotees. (FYI, I could totally handle the brusque, get-what-you’re-given attitude, but speedier service would have been nice.)

Plus, it’s hard to ignore Canter’s hallowed spot in the halls of Los Angeles history. The restaurant’s past is not unlike the trajectory of many a Jewish immigrant: started in Jersey (yay Jersey!), moved west to LA’s Boyle Heights suburb, then found a permanent home on Fairfax Avenue. Murals in the parking lot chronicle the history of LA’s Jewish community, and true to its Jewish heritage, the deli is closed for Rosh Hashanah and Yom Kippur.

Even the name of the adjoining cocktail lounge, the Kibitz Room, bears Yiddish influence, but this isn’t your bubbe’s watering hole. With a full bar and jamming local bands every night of the week, it’s been the launch pad for many a musical sensation, from The Wallflowers to Fiona Apple. In the hour just before close, the entertainment usually turns into an informal jam session, and players like Slash from Guns N’ Roses have been known to drop by and join in.

And so, with a scene that never sleeps and tasty pastrami piled a mile high, Canter’s really throws a wrench in New York’s claims of urban superiority. And now that the deli has added a location on the Strip in Las Vegas (Treasure Island), The LA/New York rivalry may have another contender added to the debate.