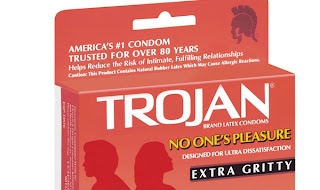 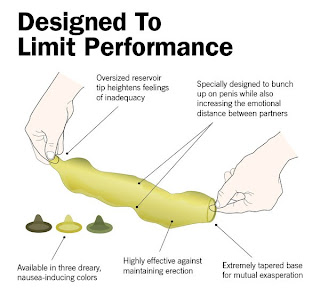 Trojan Introduces ‘No One’s Pleasure’ Condoms For Bitter, Resentful Couples
July 26, 2010 | ISSUE 46•30
The lack of expiration dates are said to heighten both partners’ stress over whether the condoms will be effective.

“We’ve always offered consumers a choice when it comes to protection, and we wanted to give emotionally distant partners an option that suits their lack of intimacy,” said Jim Daniels, vice president of marketing at Trojan. “That’s why we’ve developed the only condoms clinically proven to exploit performance anxiety, heighten discomfort levels, and prolong the petty arguments that allow couples to bicker needlessly all night long.”

According to a Trojan press release, No One’s Pleasure condoms feature a quarter-inch-thick layer of non-lubricated latex with a unique abrasive texture that creates a variety of stinging sensations “for both him and her.” The company statement goes on to explain that the product magnifies personal insecurities and awakens deep-seated, unresolved relationship issues that are “sure to raise passions and quicken your pulse.”

The cutting-edge prophylactics are also extremely tapered at their base and tip, which Trojan engineers said induces premature ejaculation and provides longer-lasting hostility and alienation.

Lead designer Benjamin Walton said the bulky, ill-fitting sheaths greatly constrict the movement of any man who wears them and when used correctly are 98 percent effective at preventing vaginal penetration.

“These condoms feel extremely unnatural, and their sandpaper-like texture is so rough and gritty it rubs everyone raw,” Walton said.

Trojan confirmed that No One’s Pleasure condoms will be available in “Frigid Touch,” “Extremely Oversensitive,” and “Ultra-Chafe: Super Dry,” and will cost $20 for a three-pack, a price researchers found perfect for instigating squabbles over who has to pay.

Many will be sold in boxes containing fewer condoms than the packaging indicates in order to arouse feelings of suspicion and jealousy and help contemptuous couples get in the right mood for unfulfilling and empty sex.

“Just by making the wrappers a little more difficult to open we raised frustration levels by nearly two-thirds.” Walton said. “And our most successful prototypes resulted in partners either not having sex or having really angry sex for maybe five seconds.”

Later this week Trojan will begin promoting the new product with a nationwide marketing campaign, running print ads that feature a silhouette of two people facing away from each other, arms crossed, and the product’s official slogan, “Let’s Just Get This Over With.”

Consumers who participated in focus groups for No One’s Pleasure were impressed by the condoms’ ability to both sustain current animosities and rejuvenate old ones.

Jerry Morelli, who explained that the condoms have helped him find new ways to loathe and disparage his wife of 15 years. “If I’m not gonna enjoy myself, I want to make damn sure she doesn’t either.”

Trojan reportedly decided to develop the new condoms after marketing research indicated the company was missing out on an entire segment of the population: the exasperated and spiteful sexual partners who account for 65 percent of all couples
Posted by Robalini at Thursday, August 12, 2010

Email ThisBlogThis!Share to TwitterShare to FacebookShare to Pinterest
Labels: Condoms