The Duke & The Dude 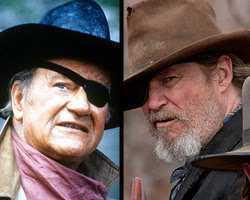 Thanks to Kenn Thomas of SteamshovelPress.com for the following... 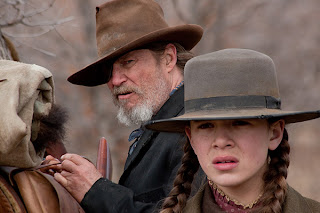 In 1969, John Wayne played Rooster Cogburn in "True Grit" -- a grizzled, drunken U.S. Marshal hired by a 14-year-old girl to track down her father's killer. The role ended up winning the aging Western star his first and only Oscar, prompting him to make a rare sequel -- "Rooster Cogburn" -- opposite Katherine Hepburn in 1975. The image of Wayne's craggy, eye-patched visage from "True Grit" has become a cinematic icon.

So film mavens everywhere were taken aback when it was announced last year that Joel and Ethan Coen would been making their own version of "True Grit." But don't expect a straight remake; this movie is based more closely on the Charles Portis novel. And Jeff Bridges, fresh off his Oscar win, was tapped to play Cogburn; that's right, the Duke has been replaced by the Dude.

The movie will also star another Coens alum, Josh Brolin, along with Barry Pepper and Matt Damon.

But what fans of the original are all wondering is how the Dude's Cogburn going to stack up next to the Duke's. The photo shows Bridges, looking ornery and weathered, sporting a beard and that famous eye patch. Wayne, a staunch Republican during the height of the '60s, was resolutely clean-shaven.

A quick comparison reveals that Wayne and Bridges sport their patches on opposite eyes. The Duke covered his left eye as a nod to his longtime collaborator John Ford, who lost vision in that eye when he removed bandages too soon after a cataract operation. No word on why Bridges decided to cover the other side.

When he was making his "True Grit," John Wayne was 61 years old. He was too unhealthy to perform his own stunts and, thanks to having an entire lung removed years prior, could barely walk more than 30 feet before heavy breathing. You might be forgiven, when looking at side-by-side photos, for assuming that Bridges is five or ten years younger that Wayne when he shot his version. In fact, Jeff Bridges turns 61 in December.