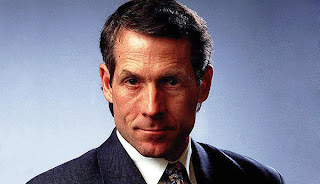 NEW YORK — Expressing regret that joyless, wrongheaded ESPN commentator and attack journalist Skip Bayless could not be dealt with otherwise, commissioners from every major professional sporting league, top officials of amateur athletic associations, and representatives of player unions reached an agreement Wednesday to end the practice of competitive sports in order to forever deprive Bayless of any subject matter.

"It's a shame that it had to come to this, but there's just no other way to stop Skip Bayless than to stop playing sports," Major League Baseball commissioner Bud Selig said in his final statement before forever closing the books on the national pastime. "Ending baseball is a tragedy, but if our sacrifice means Bayless stops spewing his petty, hateful vitriol, it will all be worth it."

"Will we miss football? Of course we will," said NFL Players Association president Kevin Mawae, who confirmed that professional football players would join all other pro athletes in turning in their uniforms and shredding their playbooks by May 1. "It's all most of us know. But for a long time now, there's been a feeling that football wasn't worth playing as long as Skip Bayless was able to take these ridiculously adversarial devil's-advocate stances purely to rile up viewers and get attention. It's better this way."

As part of the universal agreement to silence Bayless, Major League Baseball will discontinue all play Saturday night after Bayless has gone to bed; the NBA and NHL will announce their cessation at an unspecified time this weekend to deny Bayless an opportunity to nastily criticize their playoff pictures; and NASCAR will quietly close down once and for all Friday before Bayless can make some strident but idiotic statement about the sport as if he watched it all the time and were not simply reacting to something he had read that day.

By the end of this month, all high school gymnasiums will be permanently locked up, every swimming pool filled with concrete, and all soccer and baseball fields paved over to prevent anyone from ever trying to hold any vaguely athletic event about which Bayless could possibly make the smallest disparaging remark.

In addition, all related sanctioning bodies, sponsors, and athletic associations have agreed to help stanch the corrosive blather originating from within Bayless by canceling, at every level, all NCAA athletics; Little League Baseball; the Scripps National Spelling Bee; Dancing With The Stars; Scottish Highland games; the Indy Racing League; the Westminster Kennel Club Dog Show; the Boston, New York, and Chicago marathons; and soccer's World Cup.

"I love sports," said 85-year-old Brooklyn resident Myron Bell. "I love all the New York teams, and there's been nothing better in my life than sitting at home on a Sunday afternoon and watching the games on television. But by God, this is the best news I've heard in years."

According to sources familiar with the agreement, Bayless is expected to fume and fulminate through the weekend about whatever sports remain. After all athletic competition ceases to be, it is predicted he will rail, harangue, and whine like a spoiled child for several more days, complaing over the fact that sports has indeed ended. However, most say that after roughly a week without an outlet for his disdain and hatred, Bayless will begin to choke on his own bile and be silenced for good, living the rest of his years silently curled around his bone-deep contempt for all that is pleasurable and good.

Officials said that to prevent Bayless from emerging once again to "make that prim little mirthless half-smile he puts on when he pretends to listen to other people talk," all children must burn their baseball gloves, tennis rackets, basketballs, and any sports-related equipment by 2 p.m. next Sunday.

"Sport, of course, should be an exultation of the human spirit, a coming-together of all people, and a celebration of what humanity is capable of—in short, a symbol of what is best in each of us," said International Olympic Committee president Jacques Rogge, who announced that the eternal Olympic flame in Lausanne, Switzerland, would be forever extinguished this weekend. "Unfortunately, the poisonous words and deeds of Skip Bayless have ruined this, for all men, for all time."

Bayless, 58, began his infamous career as a locally hated sports journalist, writing for newspapers in Miami, Los Angeles, and Dallas. After Bayless appeared on ESPN's Jim Rome Is Burning, where he instantly eclipsed Rome as America's least-appealing sports commentator, the network offered Bayless the chance to be infuriating and wrong about sports on a daily basis as a despicable fixture on sports talk show Cold Pizza, which in turn led to loudmouth contrarian stints on First Take and 1st and 10. Soon, the smug, smirking Bayless had made ESPN's daily programming all but unwatchable.

"Frankly, ESPN deserves a large share of the blame. That's why we are shutting the network down as of tomorrow," ESPN president George Bodenheimer said. "We can only hope our sacrifice will be enough. Luckily, knowing Skip, I don't believe he will be able to think of anything to say if he doesn't have sports to denigrate, run down, or throw under the bus."

"I know you are wondering why we employed him in the first place," Bodenheimer added. "And so are we. But I think in a weird way we just felt bad for the guy."

Bayless was not approached for comment.
Posted by Robalini at Monday, December 06, 2010

Email ThisBlogThis!Share to TwitterShare to FacebookShare to Pinterest
Labels: ESPN