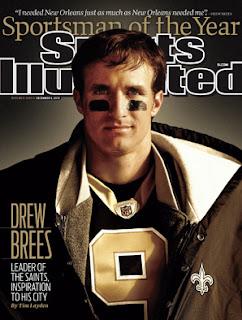 For not only leading the New Orleans Saints to the first Super Bowl title in the franchise's history, but also for helping lead the city of New Orleans' rebirth after the tragedy of Hurricane Katrina, quarterback Drew Brees is the recipient of Sports Illustrated's 57th Sportsman of the Year award. Brees will be honored at a ceremony Tuesday evening in New York City.

The SI award comes as Brees and the Saints have won four consecutive games and, with an 8-3 record, moved solidly into playoff contention in defense of the championship they won a year ago in Miami. Brees, 31, was the MVP of that Super Bowl game, but he wins SI's highest honor for much more than just his ability to play football.

Jessie Aney, a 12-year-old tennis and hockey star from Rochester, Minn., was named Sports Illustrated Kids' SportsKid of the Year. The No. 1-ranked tennis player in the USTA's 12-and-under and 14-and-Under Northern Section, she was runner-up in Minnesota's Class 2A high school state singles championships as a seventh grader. A 4.0 student, Aney school five goals in her varsity hockey debut for Century High.

Nearly five years ago, in the early spring of 2006, Brees was a broken player. After surgery to repair a catastrophic shoulder injury, the Saints were the only team that offered to make him their starting quarterback. Meanwhile, New Orleans was a desperate city, trying to find traction after one of the worst natural disasters in U.S. history. Brees would later say his landing in New Orleans was much more than just an athlete's change of venue. "It was a calling,'' he said. "We were brought here for a reason.''

Brees and his wife, Brittany, showed love for New Orleans when the city felt abandoned by so many others. Not only did Brees help the Saints make the playoffs in his first year in the city and begin the four-year climb to last year's title, but he also threw himself into helping the city recover, and its people to feel like they were not alone. "He symbolizes the people of New Orleans in many, many ways,'' says NFL commissioner Roger Goodell. "Drew believes in that community. He believes in doing what's right. He's one of the most genuine people I've ever met.''

Upon settling in a home in Uptown New Orleans, Drew and Brittany Brees established The Brees Dream Foundation, with the goal of "Advancing research in the fight against cancer and providing care, education and opportunities for children in need.'' In the ensuing years, Brees's foundation has helped raise more than $6 million, primarily in and around New Orleans, but also in San Diego (where Brees began his career and played five seasons with the Chargers) and West Layfayette, Ind. (where Brees played college football at Purdue, and met his wife in 1999).

The steady revival of New Orleans owes to the efforts of many civic leaders, but none are more visible than the quarterback of the city's beloved Saints, so long lovable losers, but now on top of the football world. "You could see it in Drew from the beginning,'' says Billy Miller, who joined the team with Brees in 2006 and played four seasons. "He had this attitude that just said: `If I lead, people will follow.'''

Most poignant of all, Brees has dug deep roots in a city that opened its arms when he was wounded. He and Brittany have two sons: Baylen, who will turn two in January; and Bowen, born Oct. 19. Two weeks ago Brees held Bowen in his arms and said, "Life is a miracle.''

And some would say the same for what has happened since Brees arrived in New Orleans.
Posted by Robalini at Monday, December 06, 2010