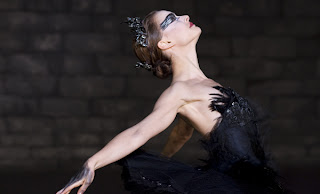 Director Darren Aronofsky's “Black Swan” may share a few thematic elements with his last film, “The Wrestler” – such as performers self-destructing before our eyes – but it has much more in common with his earlier films (“Pi,” “Requiem for a Dream”).

Natalie Portman stars as 28-year-old ballerina Nina, who appears to have had no life outside of dance. Her mother (Barbara Hershey) gave up a similar career to raise her and has an ambiguous mixture of stage mother emotions — maternal pride, genuine love, and more than a little jealousy. Choreographer Thomas (Vincent Cassel) — a cross between George Balanchine and the Peter O'Toole character in “The Stunt Man” — unexpectedly chooses Nina for the star-making lead role in “Swan Lake”.

To Thomas, Nina's utter dedication and perfect technique make her a natural for the innocent, suffering Swan Queen; but she has none of dark passion necessary for the Black Swan (traditionally portrayed by the same dancer). As he pushes her into discovering her dark side, she is also tempted by Lily (Mila Kunis), who may or may not be trying to sabotage her and take over the role.

Nina doesn't really need their help. Thanks to 28 years of utter suppression of everything but dance, her id and libido have fermented and festered; she's already about to blow even before the new gig cranks up the pressure.

“Black Swan” is an art-house horror film — 10% “The Red Shoes,” 20% “Pi,” and 70% Polanski's “Repulsion.” Aronofsky adopts much of the technique, the perspective, and the concept of the latter, which makes a great model. “Repulsion” has the advantage of a bit more ambiguity at the end, but there's plenty enough here to keep things intriguing.

Aronofsky's tendency toward deepdish pretension is less of a problem here than in “Pi,” because he elicits terrific performances all around. Since we are locked into Nina's POV, Hershey and Cassel can only hint at who they may really be, unfiltered through Nina's growing lunacy; Kunis even manages to redeem herself after her dreadful work in “The Book of Eli.”

But mostly, Portman is “Black Swan.” Outside of the Star Wars films, she has never given a bad performance, but the material here gives her the chance to break through to another level. It is inconceivable that she won't win the Oscar for Best Actress. (On the other hand, it was inconceivable that Naomi Watts wouldn't win for her similar role in “Mulholland Dr.”... and she wasn't even nominated.)
Posted by Robalini at Thursday, December 09, 2010