With comic book flicks dominating our movie culture, San Diego's Comic-Con is no longer merely a geekfest but a giant pop culture showplace. Besides the bevy of chicks found in our BabeWatch section, here's some of the highlights: 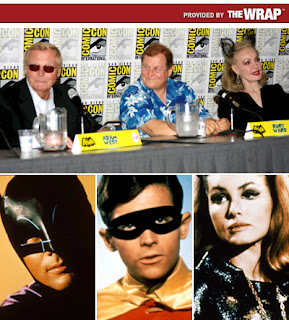 Adam West, Burt Ward & Jule Newmar had a reunion of sorts on a special Batman panel: 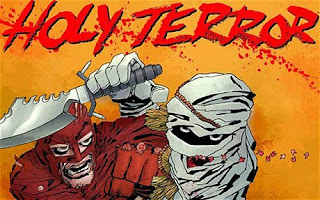 A preview of Frank Miller's upcoming Holy Terror, the comic in the vein of WWII progaganda featuring a superhero battling Al Qaeda. It will be on sale after the 10th anniversary of 9/11:

http://www.telegraph.co.uk/news/worldnews/al-qaeda/8658858/New-comic-superhero-to-take-on-al-Qaeda.html
Steven Spielberg showed up, and with Peter Jackson of Lord of the Rings fame, promoting this winter's The Adventures of Tintin: Secret of the Unicorn. Spielberg also hinted another Jurassic Park movie may be in the works:

Mark Hamill of Luke Skywalter and The Joker fame will play a bad guy in the upcoming final season of Chuck:

Speaking of The Joker, mental health experts had a panel titled "Detecting Deviants in the Dark Night: Profiling Gotham City’s Serial Killers." Of particular note was Joker, unsurprisingly, with one participant noting that he is not psychotic, but rather psychopathic:

"I felt like TV was getting too smart!" So says Mike Judge, the mastermind behind King of the Hill, Office Space and Idiocracy, about the reason behind the upcoming return of his most famous work of art, Beavis & Butthead: A cool promo for the holiday season's upcoming Kinect Star Wars for the Xbox 360, which will include a podracing campaign:

A red carpet movie premiere of Cowboys & Aliens, featuring the badass talents of Harrison Ford (who still has it) and Daniel Craig, with an assist from Olivia Wilde. When dudes playing Indiana Jones and James Bond get together, great things tend to follow: