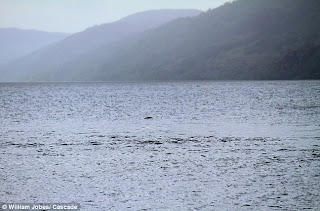 This has been a good summer for sea creature sightings. First off, William Jobes, a dude who's been hunting the Loch Ness Monster for 45 years, claims to have finally captured the creature on camera. It's a pretty good photo, though skeptics may dismiss it as a seal. Even Jobes admits that "I immediately did think it was a seal but it's head was like a sheep." 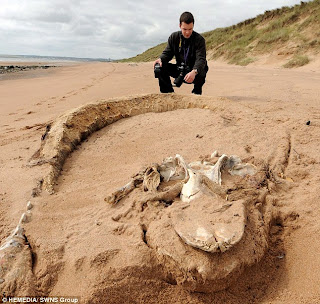 Just as interesting is the rotting carcass of a 30-foot sea monster discovered on a British beach in Bridge of Don, Aberdeen. The mainstream explanation of the remains is that it's a whale. 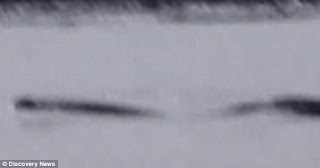 Meanwhile, Alaska may have its own Nessie, as cryptozoologist have video of a creature they identify as the Cadborosaurus. The sea serpent has "a long neck, a horse-like head, large eyes, and back bumps that stick out of the water." The video was shown in Hillstranded on the Discovery Channel. Paul LeBlond, co-author of the book Cadborosaurus: Survivor from the Deep, claims it is "the least unlike a plesiosaur." More mainstream explanations label it as either a shark, a giant eel or the remains of Sarah Palin's political career...

Loch Ness Monster? Or a stick...? After a 45-year hunt, walker claims to have photographed elusive creature
22nd July 2011
http://www.dailymail.co.uk/news/article-2017649/Loch-Ness-Monster-stick-Walker-claims-photographed-creature.html

I'm gone to tell my little brother, that he should also pay a quick visit this blog on regular basis to obtain updated from most up-to-date information.