How did the Nazis deal with the threat of syphilis from French hookers? According to SS head Heinrich Himmler: "The greatest danger in Paris is the widespread and uncontrolled presence of whores, picking up clients in bars, dance halls and other places. It is our duty to prevent soldiers from risking their health for the sake of a quick adventure."
Adolf Hitler came up with a final solution to this problem, though it was never implemented beyond the prototype stage: blow-up sex dolls to satisfy their sexual gratification. While modern dolls are in the shape of Lady Gaga, Kim Kardashian and sheep, these dolls all had blonde hair and blue eyes, to ensure fantasies didn't stray from Aryan valkyries. 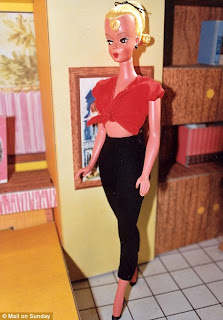 The plan, called the Borghild Project, was discovered by Graeme Donald, who uncovered it while researching the book Mussolini's Barber. The Barbie doll is based on a German sex doll named Lilli from the fifties, and the case can be made that the Nazi research done on Borghild evolved into America's beloved toy.

Say what you will about Hitler, but he sure knew how to think outside the box...

A great idea to stop soldiers getting sexual diseases

I will immediately clutch your rss feed as I can't to find your email subscription link or newsletter service. Do you've any?
Kindly allow me realize in order that I may subscribe.
Thanks.

Hello, yeah this paragraph is genuinely nice and I have learned lot of things from it regarding blogging.
thanks.

Excellent post! We are linking to this great post on our site.
Keep up the good writing.

My developer is trying to convince me to move to
.net from PHP. I have always disliked the idea
because of the expenses. But he's tryiong none the less. I've been using Movable-type on numerous websites
for about a year and am worried about switching to another platform.
I have heard fantastic things about blogengine.
net. Is there a way I can transfer all my wordpress posts into it?
Any help would be greatly appreciated!

Hi there everybody, here every one is sharing such knowledge, thus it's good to read this web site, and I used to pay a visit this webpage every day.

I have been surfing on-line more than three hours as of late,
yet I by no means found any fascinating article like yours.

It's lovely value sufficient for me. In my view, if all web owners and bloggers made just right content as you probably did, the internet will probably be much more useful than ever before.

It's a pity you don't have a donate button! I'd definitely donate to this fantastic blog! I guess for now i'll settle
for book-marking and adding your RSS feed to my Google account.
I look forward to fresh updates and will talk about this website with my Facebook group.

Heya just wanted to give you a brief heads up and let you know a few of
the images aren't loading correctly. I'm not sure why but I think its a linking issue.

I've tried it in two different web browsers and both show the same outcome.

Hi there to every single one, it's actually a nice for me to pay a visit this web site, it consists of useful Information.

Thank you for sharing your info. I really appreciate your efforts and
I will be waiting for your further post thank you once again.

It's a pity you don't have a donate button! I'd definitely donate to this fantastic blog! I guess for now i'll settle for
book-marking and adding your RSS feed to my Google account.
I look forward to brand new updates and will talk about this site with
my Facebook group. Talk soon!

I'd like to find out more? I'd want to find
out some additional information.

Here is my web-site; Unknown

I know this if off topic but I'm looking into starting my own blog and was wondering what all is required to get setup? I'm assuming having a blog like yours would
cost a pretty penny? I'm not very web savvy so I'm not 100%
certain. Any recommendations or advice would be greatly appreciated.
Thanks

Feel free to surf to my site Unknown

If you wish for to increase your knowledge simply keep visiting
this website and be updated with the most recent news
posted here.

I think this is one of the most important info for me.
And i'm glad reading your article. But should remark on few general things, The site style is ideal, the articles is really great : D. Good job, cheers

Feel free to surf to my webpage; Psn Code Generator

Hello! I just wanted to ask if you ever have any trouble with hackers?
My last blog (wordpress) was hacked and I ended up
losing several weeks of hard work due to no
data backup. Do you have any methods to prevent hackers?

Excellent beat ! I wish to apprentice at the same time as you amend your site, how
could i subscribe for a weblog site? The account helped me a appropriate deal.

Hi would you mind stating which blog platform you're working with? I'm going to start
my own blog in the near future but I'm having a tough time choosing between BlogEngine/Wordpress/B2evolution and Drupal. The reason I ask is because your design seems different then most blogs and I'm looking for something unique.
P.S My apologies for being off-topic but I had to ask!

Greetings! Very helpful advice within this article!
It's the little changes which will make the largest changes. Thanks a lot for sharing!

Here is my blog post: World Of Tanks Hack

Hello! I've been following your web site for a long time now and finally got the courage to go ahead and give you a shout out from Porter Tx! Just wanted to tell you keep up the fantastic work!

Great information. Lucky me I ran across your blog by chance (stumbleupon).
I have book marked it for later!

Feel free to surf to my webpage: Eco Sanctuary

Usually it's a result of the fire communicated in the article I browsed. And after this post "Hitler's Barbie Sex Doll". I was excited enough to drop a thought ;-) I actually do have 2 questions for you if it's allright. Is it simply me or does it look like some of these remarks appear as if they are left by brain dead visitors? :-P And, if you are writing on other places, I would like to keep up with you. Could you make a list every one of your shared pages like your linkedin profile, Facebook page or twitter feed?

That is a good tip especially to those fresh to the blogosphere.
Brief but very precise info… Thanks for sharing this one.
A must read post!

Feel free to visit my web site: The Interlace

I know this website offers quality based posts and other data, is there any other
website which provides these information in quality?

Wonderful blog! I found it while browsing on Yahoo News. Do you
have any suggestions on how to get listed in Yahoo News?
I've been trying for a while but I never seem to get there! Thank you

It's amazing in support of me to have a web site, which is valuable for my experience. thanks admin

Wow! This blog looks just like my old one! It's on a entirely different topic but it has pretty much the same page layout and design. Wonderful choice of colors!

Feel free to surf to my webpage Minecraft Crack