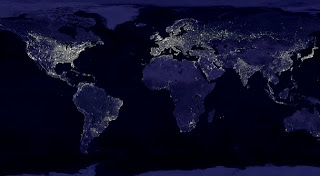 For the most part, our infatuation with alien life revolves around us finding them — but did you ever stop to think that in the eyes of another significantly-advanced, space-age civilization, we would be the alien race? We have SETI’s indefatigable search for foreign, deep space radio waves, Keppler’s continued (and successful) search for life-sustaining exoplanets, and biologists regularly discovering that life can form and survive in increasingly tenacious habitats. But what if aliens are watching us?

New research conducted by Abraham Loeb from Harvard and Edwin Turner from Princeton shows that electric, artificial lights on remote planets could be detected using next-generation ground and space telescopes. The basic approach is simple: planets that are exclusively illuminated by a local sun will have one “light signature,” while a planet with artificial lights will have another. Loeb and Turner say that this technique, with our current telescopes, would be able to pick out a major terrestrial city on the edge of the Solar System, in the Kuiper belt (50 AU) — but future telescopes, or the telescopes belonging to advanced, alien races, could see farther.

More interesting than the how is the why. Why are Loeb and Turner interested in weak, visible-light spectra rather than the megawatts of easily-detectable radio waves that are pumped into space every second? Because the amount of radio waves being produced by humanity — mostly thanks to fiber optic networks — is on the decline. In turn, this infers that other, advanced civilizations might have moved beyond radio communications too. In this case, radio astronomy won’t help us in the search for extraterrestrial intelligence (SETI) — but looking for artificial light would.

As long as alien life forms actually use artificial lights, of course — it would be awfully presumptuous to assume that our galactic overlords actually have eyes.
Posted by Robalini at Friday, November 18, 2011