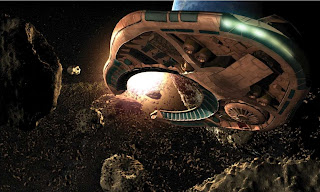 So we've had neutrinos that traveled faster than light — or at least, that result hasn't been invalidated yet. But how soon can we get spaceships that can travel to other star systems without traveling at faster-than-light velocities? The answer might lie in a relatively little-known theory.
The Basics of Heim Theory

Heim Theory was originated by Burkhard Heim, a German physicist, in the mid-twentieth century. It was attempted as a way to reconcile the two pillars of physics, quantum theory and general relativity. It takes what's currently the only way out, between the two theories - extra dimensions. Heim added two extra dimensions, in addition to the currently accepted four (three dimensions in space, and one in time) that we move through every day. Later versions of the theory have eight or twelve dimensions. Supplementing our continuous spacetime, are little quantized bits of two-dimensional spacetime called 'metrons.'

Einstein used four dimensions to equate matter with energy, laying the groundwork for a new way to produce energy in nuclear reactors, which convert solid matter to energy. Heim's goal was to find ways to convert between all kinds of energy, and in adding two dimensions to his calculations he was able to equate, at least in theory, gravitational energy and electromagnetism. This could give rise to a new kind of starship engine, which uses electromagnetic fields to slip free of gravity.

A New Kind of Engine

The coupling of the electromagnetic and gravitational forces could mean that one would have an effect on the other. All earthlings live under a relatively strong gravitational force all the time; one which is difficult to manipulate. This gravitational force has hindered our efforts to get to space. Meanwhile, we've become very handy with electromagnetism. Heim thought that enough of a magnetic field could loosen gravity's grip on us and we could blast off without the massive amounts of fuel we currently use.

This idea was taken up by Jochem Hauser and Walter Droscher, who used this aspect of Heim theory to create a theoretical hyperdrive that might power the spaceships of the future. Put a big rotating ring above a superconducting coil, run current through the coil and rotate the ring, and the magnetic field generated might wipe out the gravitational force on the ring and allow it to fly free. Unfortunately, the engine requires the kind of current density that modern materials are incapable of creating, and so it, and Heim theory, remain untestable. For now.

Going farther into the realms of the theoretical, away from the possible and into the deeply unlikely, Heim theory has been used to justify the idea of faster-than-light travel. This is getting into Wrinkle in Time territory. Enough of a magnetic field will not just pop a spaceship out of a gravitational pull, but out of regular, three-dimensional space itself. By going into higher dimensional space, a ship or person might hop from one place to another, traveling, to ordinary four-dimensional eyes, faster than light.

As much as Heim theory promises a new age of space travel, but it comes with considerable practical problems, as the expanding need for dimensions demonstrates. Although Burkhard Heim was able to show that the theory predicts the several masses and properties of particles, it does not show how particles interact with each other. Its applications are currently impossible to demonstrate. It winds in and out of popularity. Famously, physicist John Reed noted in 2006 that some parts of the theory don't yield the exact quantities that Heim claimed they did, only to reverse his opinion the next year and publicly say he believed that Heim was onto something. Until we find some metamaterial that can check some of the claims of the theory, though, we'll just have to wonder.
Posted by Robalini at Friday, November 18, 2011

Email ThisBlogThis!Share to TwitterShare to FacebookShare to Pinterest
Labels: Space