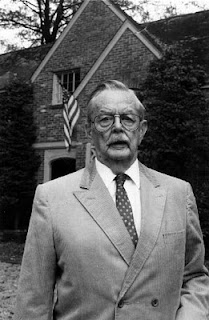 "The United States, which has long been called a melting pot, should more descriptively be called a witches' cauldron wherein the 'Hierarchy of the Grand Architect of the Universe' arranges for ritualistic crimes and psychopolitical psychodramas to be performed in accordance with a Master plan."
-J.S.D.

In addition to his super-cool name, the mysterious hermit, conspiriologist, synchromysticist, anthroponomastic etymologist, and onomastic toponymist James Shelby Downard had quite a few things going for him before his death in 1998, including a vast knowledge of Freemasonry, language, politics, and, perhaps most importantly, alchemy. He was a man who knew no equal in the realms of conspiracy and paranoia, and, had his work not been brought to light by Feral House writer/editor Adam Parfrey in the years before his death, he would have passed almost unnoticed as such.

Downard's unique take on Americana via occult symbolism and revisionist history was firmly rooted in the basic tenets of alchemical magic, and his belief that alchemy (as practiced by Freemasons, of course) guided much of America's historical path. Downard was not a prolific man, espousing his theories in small pamphlets spread out through the years. But his most compelling ideas about Americana and alchemy can be boiled down to three major points (a "trinity" if you will--more on that later):

1) The detonation of the first atomic bomb at the Trinity site in New Mexico in 1945 represented the "destruction of primordial matter" necessary to begin magical transformation in alchemical lore.

2) The assassination of John F. Kennedy in Dallas, TX, November 22, 1963 represented the "killing of the king" which functions as a second step in the alchemical trinity.

3) A third, unidentified event would complete this Trinity and usher in a new age of either supreme enlightenment or supreme evil. Traditionally, this alchemical "third step" consists of "MAKING MANIFEST ALL THAT IS HIDDEN".

Downard's best known work, a summation of these theories co-authored by controversial anti-Zionist conspiracy nut Robert Hoffman II, was titled King Kill 33, self-published, and distributed in small batches in 1987. It is some heavy shit.

Amazon.com says this: "Mind Control, occult scenarios, conspiracy and ritual crimes… In "James Shelby Downard’s Mystical War," author Adam Gorightly chronicles the famed conspiracy researcher’s life long battles against Masonic Sorcery as an investigator and exposer of the Science of Symbolism, Onomatology (Science of Names) and Mystical Toponomy (Science of Places). "James Shelby Downard’s Mystical War" picks up where Downard left off and follows the bread crumbs down a rabbit hole where only the brave (or crazy!) dare follow."

Then again, Amazon is often full of shit. If you'd like to learn a bit more before actually purchasing Gorightly's book, check out an excellent, detailed review (which nearly doubles as a Downard bio) over at Loren Coleman's Twilight Language blog. From his write-up:

"As you begin to read this new book about Downard, you might think that you have opened a cryptocomedic LSD trip about a conspiracy-oriented Forrest Gump-like character, who amazingly finds himself in all the wrong places at the wrong times...

"Would you believe John F. Kennedy as a ceremonial king-who-must-die? I'm afraid there is a certain body of opinion, undoubtedly the farthest-out brain wave of assassinology yet, that maintains the killing was pulled off, not by the Russians, the Cubans, the CIA, or the Mafia, but by alchemists.

As I understand the hypothesis, President Kennedy was for some reason chosen as The King (remember "Camelot," "Macbird" and all that?) after the fashion of James G. Frazer and Mary Renault whose "The King Must Die" he had been given to read before his death. This killing of the king in Dallas was related somehow to the touching off of the world's first atomic bomb at the Trinity Site in New Mexico 18 years earlier. Apparently the Bomb was the "destruction of primordial matter" stage of the grand alchemical working, but these conspiracy buffs aren't much more specific on details than were the early alchemists in their recipes. Anyway, Kennedy represented the next stage of the process - the "Death of the White King" - when he was immolated on a trinity site of his own. For, aren't Dealey Plaza and the ill-famed Triple Underpass on the bank of the old Trinity River?"


Sounds feasible, right? We already know the Freemasons run the show, dangling, as it were, from puppet-strings held by the Illuminati, who are in turn controlled by a vastly secretive race of shapeshifting reptilian space aliens. Common knowledge here, really, but the weird connections that Downard pointed out in his life work will really blow your mind. I don't mean to mislead: he didn't have any reptoid/Illuminati theories per se. But the loose ends he ties together via language, numbers, and geography are multitudinous are cripplingly odd nonetheless...

Also important: Masonry and the Downardian Nightmare, by Adam Parfrey. Foreward to Part 1 of JSD's autobiography, Carnivals of Life and Death. Parfrey's pieces on Downard in the much-cited Apocalypse Culture books are absolutely essential. Downard's Carnival only covers his life from birth to age 26--he died before completion of the second volume.

But back to the names and numbers...

Consider, my friends, these concepts (taken en masse from The Sorcerer's Apprentices: James Shelby Downard and the Mysteries of Americana, by Jonathan Vankin and John Whalen), just the tip of the iceberg, really, when studying JSD's work:

- Dallas is located just south of the 33 degree of latitude. The 33rd degree is Freemasonry's highest rank.

- Kennedy's motorcade was rolling toward the "Triple Underpass" when he was slain by, according to some analysts, three gunmen. Three tramps were arrested right after the murder. Hiram Abiff, architect of Solomon's Temple and mythic progenitor of Freemasonry was murdered according to Masonic legend by three "unworthy craftsmen."

- "Dea" in Latin means goddess. "Ley" in Spanish can refer to law or rule. "Dealey Plaza" was "goddess-rule" plaza.

- Blamed for the assassination was a man named "Oz," explained by Downard as "a Hebrew term denoting strength." Divine strength is integral to the King-killing rite.

- "Oz" was killed by "Ruby," just as the ruby slippers freed Dorothy from the land of Oz in The Wizard of Oz, "which one may deride as a fairy tale but which nevertheless symbolizes the immense power of 'ruby light' otherwise known as the laser."


- Dealey Plaza is near the Trinity River, which before the introduction of flood control measures submerged the place regularly. Dealey Plaza therefore symbolizes both the trident and its bearer, the water-god Neptune. "To this trident-Neptune site," writes Downard, "came the 'Queen of Love and Beauty' and her spouse, the scapegoat, in the Killing of the King rite, the 'Ceannaideach' (Gaelic word for Ugly Head or Wounded Head). In Scotland, the Kennedy coat of arms and iconography is full of folklore. Their Plant Badge is an oak and their Crest has a dolphin on it. Now what could be more coincidental than for JFK to get shot in the head near the oak tree at Dealey Plaza. Do you call that a coincidence?" For those in our audience still too puzzled by the whole "Wizard of Oz" thing to get that last bit: the "Queen" is Jackie and "Ceannaideach" is the Gaelic form of Kennedy.

- An earlier "Trinity Site," in New Mexico, was the location of the first atomic bomb explosion. Chaos and synergy, breaking apart and joining together are the first principles of alchemy. The atomic bomb broke apart the positive and negative (male and female) elements that compose primordial matter. Physicists refer to this fiendish trickery as "nuclear fission."

I apologize for throwing all of this information at you in such a relatively short amount of time. Downard's writing takes lots of time to digest (to say the least). But allow me one last digression before I leave you:

Remember up top, when I alluded to the alchemical "third step" Downard predicted in almost all of his work--the act of MAKING MANIFEST ALL THAT IS HIDDEN? The historical event that would usher a New Dark Age (and/or enlightenment)? Remember?

Well, many have speculated that a very major tragedy in American history, a tragedy that the man himself didn't live to witness, served as completion of the Downardian Trinity...

James Shelby Downard was indeed a weird guy--seen by many as a genius, a guru, a wizard--but most often, as a kook. I definitely count myself among those who think he may have been on to something huge and hidden. But then again, there are those who doubt he ever existed at all.
Posted by Robalini at Saturday, November 26, 2011

Hi. Here are some corrections in regard to Shelby's publishing career:

The first edition of "Apocalypse Culture" published in 1987 by Amok Press contained Downard's "King-Kill 33°" which was edited by Michael A. Hoffman II.

The "Expanded and Revised Edition" of "Apocalypse Culture" that came out in 1991 through Feral House contained another essay by Downard, "The Call to Chaos: From Adam to Atom." Fortean writer Bill Grimstad assisted with the editing of that article.

The "Secret and Suppressed" book, first issued in 1992 with Jim Keith credited as its editor, contained a Downard article, which he kindly sent to me for that purpose.

My "Cult Rapture" book, published in 1994, contained my article about Downard when I visited him in Memphis. The photograph on your article was mine of him standing in front of his house.

In 2006 we finally got around to publishing a portion of Downard's autobiography through Feral House: "The Carnivals of Life and Death."