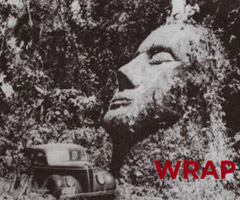 The filmmakers behind "Revelations of the Mayans 2012 and Beyond," who said that their film will reveal evidence of contact between the Mayans and extraterrestrials, have now released to TheWrap what they claim is photographic evidence of a pre-Mayan, alien civilization.

And they claim they've got Stephen Hawking on their side.

The monument, according to an accompanying letter by archaeologist Hector E. Mejia, dates back to between 3,500 and 5,000 B.C. and is evidence of a superior civilization unlike any known to have lived on Earth.

Mejia described the photograph as being "of a bust which at first glance can be seen to have an elongated cranium and fine characteristics which are not consistent with pre-Hispanic races of America."

"I certify that this monument presents no characteristics of Maya, Nahuatl, Olmec or any other pre-Hispanic civilization," he wrote. "It was created by an extraordinary and superior civilization with awesome knowledge of which there is no record of existence on this planet."

The photo is one of several purported pieces of evidence that will be shown in Julia-Levy's documentary, which he is making with the cooperation of the Mexican and Guatemalan governments keyed to 2012, the date the Mayan calendar ends.

And Julia-Levy then passed along a direct quote that, he claimed, came from no less than Stephen Hawking, whom he said "is going to work with us" and will be included in his film: "'I warn humanity that aliens are out there. Just because the aliens were friends with the Mayans doesn't mean they are our friends. Humans should avoid contact with aliens at all costs.'"

An email sent to a representative for Hawking asking about the authenticity of the quote was not answered.

Hawking has in the past said that that alien life is likely to exist in the universe ("to my mathematical brain, the numbers alone make thinking about aliens perfectly natural"), and has speculated about the dangers of contact.

"If aliens ever visit us," Hawking has said, "I think the outcome would be much as when Christopher Columbus first landed in America, which didn't turn out very well for the Native Americans."

TheWrap has been unable to unearth any instances of Hawking saying anything about the aliens ever contacting or being friends with the Mayans.

But Julia-Levy insisted that the words are Hawking's. He also claimed government conspiracies surrounding the photo and the head it depicts: After the photo was taken in the late 1930s, he said, it was published only once, in a magazine that was then immediately withdrawn from circulation by "the government of England."

He also said the head depicted in the photo, 17 meters (51 feet) tall and six meters wide, is no longer in the Guatemalan jungle but has been moved to the United States and hidden.

"I was informed by officials in the government of Guatemala that the U.S. government brought it here," he said.

According to Meija, "The creative style is not consistent with the civilizations that inhabited the southern coast of Guatemala prior to the arrival of the Spaniards ... It is indisputably pre-Olmec and pre-Maya ... [O]ne can assign an age between 3,500 and 5,000 BC."

Mejia is a licensed archaeologist affiliated with the Atlas Arqueological de Guatemala and the Institute of Anthropology and History in Guatemala, and with the University of San Carlos. His statement was written in Spanish; TheWrap had it translated.

Mejia goes on to compare it to other monuments, including "the Moais of Easter Island," "the Pascual Abaj monument ... in Guatemala" and "the Great Sphinx in Egypt." He said it was "created by an extraordinary and superior civilization" that "settled in the south of Guatemala and from there shone its light and knowledge on the hunter gatherers who were its first students and received its teachings."

Julia-Levy said that Mejia is part of an international team of archaeologists and other professionals assembled by the filmmakers because they are "willing to tell the world the truth" about the Mayan/alien connection.

"We have a gang of archaeologists and scholars and scientists that are going to come forward and show everything they have," he said.

And, he swears, governments will do the same.

"I was told by the officials that the Mayans and the extraterrestrials had a history of exchange," he said. "This is official. This is as official as it can get."

Added Julia-Levy, "The world hasn't seen this. Nobody has seen this. But there's no doubt in my mind that the world is ready for the truth.

"This is going to create a worldwide impact in how people see things."

His movie, by the way, has yet to begin shooting. Principal photography is scheduled to begin in Mexico and Guatemala in mid-November.
Posted by Robalini at Sunday, November 13, 2011