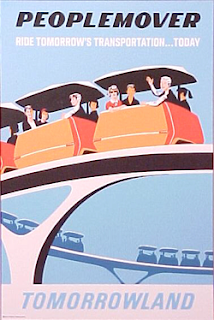 Never mind those pesky jet packs or flying cars from The Jetsons, in the future man will travel in groups of four, roughly at the pace of a hurried snail. At least, that was the vision put forth by Disneyland’s glimpse into a futuristic tomorrow called the Peoplemover. And while this form of transportation never quite became the preferred method of travel for future generations, it managed to provide a service not to be discounted; a peaceful journey through the land of the future.

The Peoplemover opened in 1967 and offered a scenic round trip journey through every nook and cranny of Tomorrowland. Guests traveled up a moving sidewalk to the boarding area, anxious to enter their own transportation vehicle. Each vehicle held up to four adults and each “train” consisted of four vehicles linked together. Each group of vehicles were one of four colors: red, blue, yellow, or green. In 1987, the cars were repainted white with colored stripes.

As you approached your Peoplemover vehicle, the roof would raise to allow easier entry and the doors would slide open in a similar fashion to the doors on Star Trek’s “Enterprise” starship (although, sadly without the whooshing sound). You and your fellow passengers would take your seat and head at a white-knuckled two miles per hour towards the entrance to Tomorrowland before making a sharp left turn and entering the show building that housed either “Monsanto’s Adventure Through Inner Space” or the Star Wars themed, “Star Tours” depended on which era you were visiting in.

Moving forward, you would pop out over the Starcade video game arcade and (again, depending on the decade) enter another show building to catch a glimpse of Space Mountain, a thrilling roller coaster through the darkness of space. Of course, this darkness meant that you were more likely to hear the screams of Space Mountain riders, rather than actually see much of anything, other than a few stars and maybe an asteroid that looked suspiciously like a chocolate chip cookie.

From here, the Peoplemover would travel over the now-extinct Mission to Mars and head onward to a section added in 1977 that would, at least momentarily, give you the impression that you were traveling much faster than you actually were. This “Superspeed Tunnel” later became the futuristic world of Tron and provided the once in a lifetime experience of traveling through a 1980’s video game, though luckily without a Pacman trying to devour your vehicle.

Upon your survival of Tron, you would take a leisurely jaunt over the submarine lagoon and Autopia racetrack before entering the final show building to get a glimpse of the 360-degree film America the Beautiful. Then, it was back to the loading platform, having given your feet a full sixteen minutes of much needed rest.

Sadly, the Peoplemover at Disneyland closed in 1995 (the Florida version is still running), to make room for one of Disneyland’s shortest-lived attractions of all time, the ill-fated Rocket Rods. And yet, the ghostly track of the Peoplemover still winds its way through Tomorrowland, reminded every visitor of its former presence, when colorful cars meandered throughout the area and lent a never-ending kinetic motion to the area. Rumors abound that the Peoplemover may someday return to these tracks but to date, plans have moved almost as slowly as the Peoplemover cars once did.

Then again, the Peoplemover didn’t travel much slower than the rush hour traffic of present day. Maybe the Disney Imagineers weren’t so far off with the speed they chose for the ride. Two miles an hour seems to be the norm these days.
Posted by Robalini at Saturday, November 26, 2011