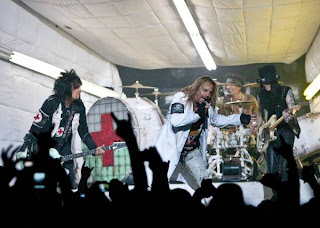 The 30th anniversary celebrations for Motley Crue are heating up, and it appears that they are set to become the first heavy metal group to sign a short-term residency here in frontman Vince Neil’s hometown. Details are shrouded in secrecy, as nobody in the group or at the Hard Rock Hotel will reveal details, but here’s what I’ve confirmed so far:

The four bad boys of rock will play a nearly monthlong series of three- and four-night concerts a week at the off-Strip casino starting at the end of February. Expect the official announcement just before Thanksgiving just as the Crue take off for a December tour of Britain complete with Tommy Lee’s mind-blowing, 360-degree drum roller coaster. The rockers play Wembley Stadium on Dec. 14 and then head home for the holidays...